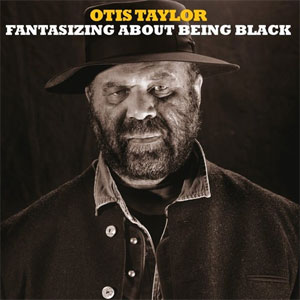 Otis Taylor is one of the foremost modern-day practitioners of the blues. He doesn’t make bar-band electric blues; instead, his largely acoustic approach to the form is built upon the Delta traditions of old, delivered with a decidedly contemporary mindset. Honored recipient of a dozen Blues Music Awards, Taylor has tackled the subject of racism head-on in Fantasizing About Being Black, his 15th album. Strictly speaking, Taylor’s choice of spare instrumentation and arrangements is repetitive; in practice it’s better described as trance-focused. That musical backdrop – with hauntingly effective use of cornet providing running counter-melody – helps keep the focus on the songwriter’s impassioned, thoughtful ruminations. Songs like “Jump Jelly Belly” often confine themselves to a single chord. And when Taylor does go electric – as on “Hands On Your Stomach” the trance vibe remains present, albeit in amped-up fashion.