Ever since he broke through with his third album (1990’s Ah Via Musicom), Austin, Texas guitarist Eric Johnson has been a prominent musical figure, a widely admired guitar hero. From his start, Johnson wedded dazzling technique to a strong melodic sense, gaining fans along the way. Guitar World rated his Grammy Award-winning single “Cliffs of Dover” among the top 20 greatest guitar solos of all time. But though he came to prominence as an electric guitar shredder, Johnson’s most recent album, EJ, released in October 2016, is a completely acoustic effort. And Johnson’s current tour in support of EJ finds the electric guitarist onstage alone, armed only with an acoustic guitar and piano.

Even though Johnson is thought of primarily as an electric guitarist, he clearly relishes the opportunity to unplug and explore the sonority of his acoustic instrument. And he approaches the acoustic guitar quite differently. He says his goal is to “produce the song with just a singular instrument. In other words, I like to finger pick, and have the bass and the rhythm and the melody go on at the same time.” Johnson’s goal on acoustic is to orchestrate a song, creating a complete musical picture with a single instrument. That’s a radically different approach than the one he brings to the electric guitar, which he thinks of as as “an ensemble instrument that plays just one [part] out of a multitude of pieces.” 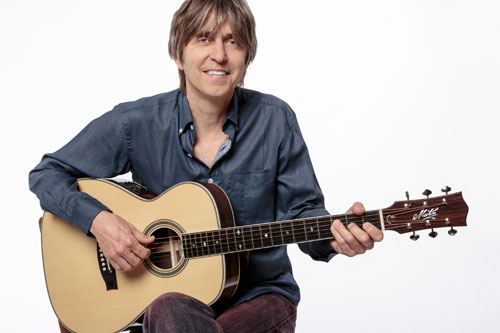 Early in his career, Johnson developed a reputation as a painstaking perfectionist in the studio; fans often had to wait four, five or even six years between album releases. He’s still not an especially prolific musician: EJ is only his ninth studio album in 39 years. But for this latest release, Johnson intentionally employed a new and simpler recording strategy. “I was cutting stuff live in the studio,” he says. “I would just come in and record.” And if he didn’t get the results he wanted, he says he “would come back in a few days and try again.”

That approach to studio work brings Johnson closer to the methods used by the folk music heroes of his youth. “Those guys didn’t sit there with ProTools, putting note after note together,” he says with a laugh. His back-to-basics approach lends itself to the music on EJ: there are no guitar overdubs on the album, even on a track like “Once Upon a Time in Texas,” which has the sound and feel of several guitars playing at once. The record’s sole guest spot is Doyle Dukes‘ guitar duet with Johnson on the 1951 Les Paul and Mary Ford tune, “The World is Waiting for the Sunrise.”

The shows on Johnson’s current tour might disappoint those wanting the dazzling electric fireworks found in his electric repertoire. But those open to the subtler – yet exciting in their own way – shades of his acoustic work will enjoy seeing the guitarist in an up-close and intimate setting. “For the most part, the old fans are liking this,” Johnson says, though he concedes there are some fans “who are probably wishing I was doing the electric thing, I’m sure. It’s a change.”

In addition to the songs off EJ – including a stellar instrumental reading of Simon & Garfunkel‘s hit “Mrs. Robinson” – concertgoers can witness Johnson exploring the acoustic opportunities within songs from his back catalog. The set list includes songs dating back to Ah Via Musicom, and even one each from Tones (1986) and his 1978 debut, Seven Worlds. “I actually have more songs than I can do each night,” he says.

Johnson hasn’t forsaken his electric guitar, but he’s considering working some acoustic material into his future electric sets. And fans can expect more along the lines of EJ. He says that his current set includes some as-yet-unrecorded songs. “I have a bunch of stuff written for a Volume 2 already,” he says.