The career of violinist and singer Gaelynn Lea got a big boost when she won 2016’s second annual Tiny Desk Contest; that allowed her to perform on the popular NPR podcast hosted by Bob Boilen. More than 6,000 artists submitted homemade videos, and the Minnesota musician’s entry stood out among those of her competitors. On the heels of that breakthrough performance, Gaelynn Lea mounted a one-woman national tour that brought her to to Asheville’s Grey Eagle January 31.

Lea is unique in several ways; she makes music in two very different styles. Billed as The Murder of Crows, she and guitarist Alan Sparhawk make music that incorporates elements of indie-rock and folk. And on her own, Lea uses violin and looping pedals to create a hypnotic ambient/drone over which she applies her high, clear vocals. 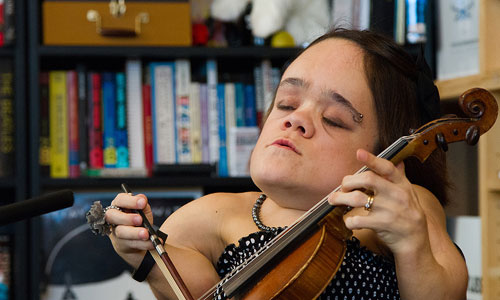 Gaelynn Lea also has a medical condition called Osteogenesis Impefecta (“Brittle Bones”). Lea is of small stature, and the inventor of the violin surely did not have someone like her in mind when designing the instrument. Because of her size, Lea had to develop a different approach to playing the violin; working with her music teacher in elementary school, she came up with an upright playing style not unlike the one used by cellists.

Even as a kid, Lea wasn’t intimidated by the violin, already a notoriously difficult instrument to master. She laughs and says, “I probably didn’t know any better!” She believes that learning a musical instrument when one is young means not being burdened by the idea of limitations. “Since you have no prior experience, it’s almost better in a way,” she says.

Lea’s first several years with the violin were spent in the classical idiom, working with sheet music. But when she began to move toward traditional fiddle music, she began to develop her skills of playing by ear. “That’s what allowed me to get into folk and rock music,” she says. “I don’t ever use sheet music when I’m playing with another person.”

Lea’s trademark sound involves laying down a musical foundation with her violin, looping it with an electronic pedal, and then adding more violin lines and vocals in real time on top of that. The result is a sometimes otherworldly mix of acoustic and electronic textures. “Alan introduced me to the idea of a looping pedal; after playing together for about a year, he gave me one of my own,” Lea says.

The violinist doesn’t shy away from discussion of her disability; in fact she’s an activist and a public speaker on the subjects of accessibility, life balance and music. But she doesn’t define herself through her disability. “For me personally, disability is not a primary identifier,” she says. Lea concedes that she identifies with disabled persons as a group, but “on a daily basis, I think more about being a musician than I do about being in a wheelchair.”

In addition The Murder of Crows’ 2012 Imperfecta EP and some online tracks by her old band Snöbarn, Lea has released four albums under her own name; her solo recorded debut was All the Roads that Lead Us Home, released in November 2015. That disc showcases the atmospheric vibe of Lea’s music; the folk textures are filtered through heavy reverb, an effect more commonly associated with rock music. That was a conscious choice for the violinist. “It’s all natural reverb, though,” Lea says. “I recorded it in a cathedral called Sacred Heart.” Everything on that album was recorded live in the church. “Because there’s no way to ‘track’ [overdub] a looped album,” she says.

Lea is careful not to let technology overwhelm the organic feel of her instrument. “Even if people don’t really know what looping is,” she says, “I want to make music that’s sonically interesting, and to reach a wider audience.”

Simultaneously operating the pedal and playing the violin requires a good bit of focus and concentration. Lea laughs and admits that she has to remind herself, “Well, I’ve got to press the button right now; otherwise this is not going to work!” But after working with the pedal now for more than 3 years, she says she’s growing more comfortable with it every day. “It took me 2 ½ years to feel like I could bring it out in public by myself.” But once she did, it opened up a lot of musical possibilities. “It gave me an an opportunity to perform solo,” she says.

Touring in various venues across the country, Lea does encounter accessibility challenges. And she believes that those obstacles can sometimes discourage disabled persons from pursuing a life in music. “There’s not as much access to music if you have a disability,” she says. “I know there are a lot of very creative people with disabilities, and I’d like to see them become more represented.”