Regina Spektor readily concedes that she has a somewhat unusual biography. Born in 1980 in what was then still the Soviet Union, Spektor emigrated to the United States at age 9; her Jewish family was fleeing discrimination in Russia. By that time, Spektor was already 3 years into her piano studies, but she was forced to leave her piano behind.

After her family settled in the Bronx, she continued her classical studies, obtaining the use of a piano wherever she could find one. While her musical interests began to expand into popular idioms, Spektor enrolled in classical studies at Purchase College’s Conservatory of Music, graduating with honors in 2001. Her popular music inclinations were never far from the surface, though. From her start, Spektor wrote and performed her own material, only rarely playing the music of other songwriters. She would self-release her debut album, 11:11 that same year. 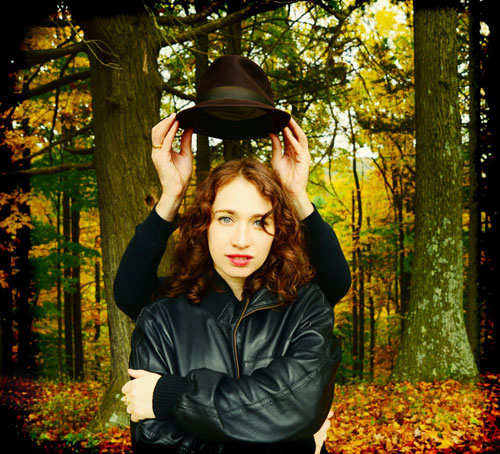 Spektor’s career really took off in 2006 with the release of her fourth album, Begin to Hope. That album represented a refinement and expansion of her sound. But most of the elements of her style – piano-centric arrangements, clear and often impassioned vocals, thoughtful lyrics – had already been in place for years. Begin to Hope was certified Gold in four countries, charting in seven. By the following year, she was a high-profile performer at the annual Bonnaroo Festival in Tennessee.

Her more recent albums – Far (2009) and 2012’s What We Saw from the Cheap Seats – have top-tenned the U.S. charts, and Spektor’s latest record, Remember Us to Life was released last September to overwhelmingly positive reviews. In just over a decade in the bright spotlight, Spektor has become one of the most admired singer-songwriters of her generation, all while making music on her own terms.

But while she admits that her unusual story does inform her music, Spektor is not especially interested in the ways she might be different from others. Instead she focuses on the ways that we all connect. “It’s always really hard to figure out what comes from what,” she says. “In some ways, sometimes it matters a lot that I come from Russia, that I come from this Jewish family and there is this history of persecution in the story of my family. I carry that with me into art, and into my experience of the world.”

And Spektor embraces that feeling of connection in other ways, too. She and her husband became parents a few years ago. “You meet somebody in the aisle of a supermarket – someone with a child the same age as yours – and you can almost finish each other’s sentences,” she laughs. “So while my biography is unique, I’m much more interested in all the places where we connect rather than where we differ.”

And she feels that perspective is one worth cultivating. “At this moment in our kind of human history,” Spektor says, “we’re constantly being pushed to figure out our identities into these neat little packages and define ourselves.” She’d rather explore the shared parts of life experiences: “’Oh, you experienced grief? I have experienced grief.’ And, ‘You had to struggle with this thing? So did I.’”

That kind of thoughtful perspective colors Regina Spektor’s ideas about what constitutes success. She says that the concept of “making it” in music is “very self-congratulatory; then you can assume that you can relax in some way.” But on another level she thinks that defining success is just “part of the myth of making art.” A moment like that never really comes, she says.

Citing various career milestones – achieving financial security, personal growth, becoming part of a community of artists and “being of use to the world in some way” – Spektor suggests that instead she appreciates “the tiny increments of excitement that happen. And my life has been crazy-full of them.”

She mentions a particular bar gig from years ago. “All of a sudden, the after-work crowd just got quiet and listened to my music for an hour and didn’t talk over my songs,” she recalls. “I remember that moment, and it felt like I made it.”

Another “increment of excitement” for Spektor was “the first moment where somebody said, ‘Here’s a hundred bucks for playing this show.’” Another: “Somebody invited me to open for them.” And without a doubt, one of the biggest milestones in Spektor’s career came in May 2010, when she performed at a White House reception honoring Jewish American Heritage Month; the audience included President and Mrs. Obama, and Vice President Biden.

Spektor appreciates the smaller victories, too. “Writing a new type of song that you’ve never written before” brings a sense of success, she says. “Or playing a chord that somehow – even though you’ve been playing this instrument since you were six – you never noticed that it’s just right there, and you never noticed it before.” When that happens, Spektor says with a smile, “You feel like you made it … finally, you’ve made it.”

Regina Spektor’s current tour in support of Remember Us to Life takes her to 21 cities in March and April, including a March 17 date at the Fillmore in Charlotte. As for her future plans, she remains open to whatever develops. She wrote “The Call” for the 2008 motion picture The Chronicles of Narnia: Prince Caspian, and recently dipped her toe back into the world of film music with a (for her) rare cover song, George Harrison‘s “While My Guitar Gently Weeps” for the soundtrack of Kubo and the Two Strings.

With her background in classical music, it seems that film scoring could be something she’d consider pursuing. “I would do it if it was a true creative endeavor,” she says, “if it really felt like I was creating art in tandem with all these other people. I like to be co-operative and creatively excited, but I don’t like to just sort of be a gun for hire. I only want to do it in a good way.”