Sometimes it takes decades to become an overnight sensation. Such is the case of soul stirrer Lee Fields; though he released his first single, “Bewildered” b/w “Tell Her I Love Her” on a tiny label in 1969, he didn’t truly score big until 30-plus yeas later. And then his career truly took off some 20 years after that. But as one of the hardest working men in show business, Lee Fields has had many successes along the way.

Fields was born in 1951 in Wilson, N.C., east of Raleigh. His earliest aspirations had little to do with music. “I really just wanted to be a businessman,” he says. “In that time, people of color had no vested interest in real estate or anything. It seemed like we had very small shares of ownership in anything.” 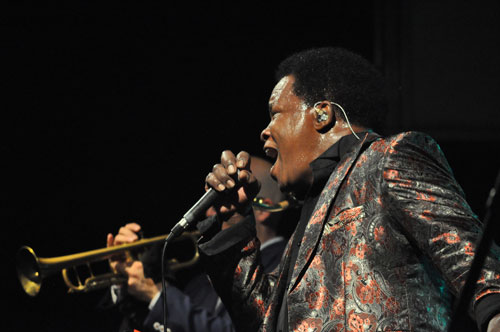 But Fields – then only 13 – found himself on the receiving end of a dare. Some of his friends challenged him to appear in a local talent show. “Everybody was talking about this guy called James Brown, and how I looked like him,” Fields says with a laugh. “At the time, I was more into Sam Cooke! But I learned the songs.” He took the stage and started singing. “The girls went nuts, man! And I said to myself, ‘This is not a bad job at all.’”

Fields says he still wasn’t convinced that the life of a musician was for him. But along with an estimated 73 million other Americans on February 9, 1964, he watched The Beatles perform on The Ed Sullivan Show. “That really made me want to become an entertainer,” he says. His mother signed for him at a Wilson music store, letting him buy a guitar on time payment. “I learned how to play,” Fields says,”because I wanted to be just like The Beatles. With those funny haircuts and those black suits, they were from another place and time!”

Another landmark event in popular culture took place in December of that year. In a local movie theatre, Fields watched a new concert film. “I saw James Brown on The T.A.M.I. Show, and that sealed the deal: I wanted to be a businessman, but I decided, ‘I’m going to stick with this music; this is what I really want to do.’”

As a self-trained guitarist and keyboardist, the singer landed live gigs, but wouldn’t cut his first record for several more years. For a time, he was the singer for a new group, Kool & the Gang. But as their star rose, his seemed to fade. “Their instrumentals became so popular,” Fields says, “that they didn’t need a singer. And I could feel that.” By 1971 he had left the group.

Between 1969 and the end of the next decade, Fields would record and release about a dozen singles for nearly as many independent labels. In that time, he often co-produced, learning his way around the studio equipment. Fields worked with Jerry Williams Jr. (aka Swamp Dogg) on a number of singles. “Swamp Dogg was deep down in the funk,” Fields says. “Before George Clinton!” Speaking of P-Funk, Fields also co-wrote music in 1983 with keyboardist Bernie Worrell. “We charted on Billboard with ‘Shake It Lady Shake It,’ and I thought I was gonna get a bunch of gigs,” he laughs. “I got two.”

He had self-released an album, Let’s Talk it Over in 1979; it would be reissued in 2012 after his national success. On its original release, the out-front funk of Let’s Talk it Over didn’t make Fields a household name, and as tastes changed toward disco, Fields took something of a time-out. “I spent a great deal of time analyzing the market, figuring it out, becoming a voracious reader,” Fields says. To support his family, he reactivated those business goals, moving into real estate. But eventually he returned to making music.

In the early 1990s, Fields released Enough is Enough; its cover shows the smiling, jheri-curled Fields in full James Brown mode. The album was effectively a one-man show. “Two songs on Enough is Enough used live musicians,” Fields says. “Everything else was me, and I’m singing background on everything.” He recalls that the record was acclaimed by aficionados of Southern soul.

“But I wanted to be an artist for everybody,” he says. What he really wanted to do then – and does now – is “break down ethnic and color barriers, because music is supposed to be a universal thing.” Fields notes that much of what we call Southern soul was made by a very much integrated group of musicians; he mentions the Swampers out of Muscle Shoals, Alabama, and the Stax Records “house band,” Booker T. & the MG’s.

Fields believes he hit upon a way to “make the music adaptable, without changing.” That approach has informed his music ever since his 2009 release, My World. That disc established the Lee Fields template for the 21st century: soulful, slow-burn tunes that ooze emotion yet crackle with energy. Backed by The Expressions, one of the best bands in the soul business, Lee Fields makes new music that’s timeless. Lee Fields & the Expressions followed that set with four more albums; released in October, Special Night is their latest, and perhaps their best.

“Soul is a spirit,” Fields says. “And that spirit I truly believe is of God. So when I sing soul music – pure soul music – I believe I’ve got to try to sing it in a fashion that, hopefully, will be pleasing to man and God.” He laughs when he admits that his songs occasionally veer toward ungodly subject matter. “But God would probably say, ‘Well, okay. I’ll let you slide with that. But you’re close!’ So I’m very selective with the words that I put in my songs.”

Fields’ headlining spot at 2014’s Transfigurations Festival in Marshall, N.C. was a highlight of that three-day event. “I remember that day very well,” Fields says. “People came out and allowed themselves to be open to the music; they feel it. It’s all about love.” Fields spent most of January 2017 on tour throughout Europe, where he connects with audiences as well as he does here at home.

Fields is modest about the music he makes. “We’re not doing anything new,” he says. “A soul singer could be anybody singing from the spirit.” He believes it’s soul music “just as long as it’s made by a combination of individuals who can interject their feelings into it.”