Bluegrass legend Del McCoury remembers vividly the first time he saw and heard the Steep Canyon Rangers. It was at a street festival in Raleigh or Charlotte, not long after the group had formed. “The boys might have still been in college, or just out of college,” he recalls. Even then, he was struck by their distinct musical personality. And of course as bluegrass players themselves, the Rangers were all fans of McCoury and his body of work. The current-day fruit of that mutual admiration society was a three-date run by The Steep Canyon Rangers with special guest Del McCoury at Asheville’s Orange Peel last January.

“A lot of these younger bands, you know, they tend to sound alike,” says McCoury. “But those boys, they have their own sound. And it’s a natural thing. Woody [Platt] has got his own voice, and of course they’ve got great harmonies.” 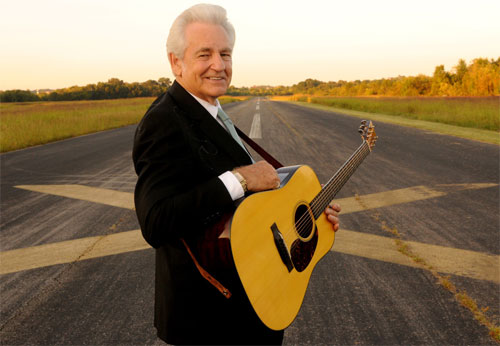 Perhaps more than with most other styles of popular music, tradition is a highly-valued commodity. Now 77, Pennsylvania-born McCoury developed musically in the mid-Appalachian region, while the Steep Canyon Rangers are from Brevard, N.C. McCoury thinks that time and location do account for some of the differences between his music and that of the Rangers.

“Naturally, a lot of the younger musicians were influenced by different people than I was,” McCoury says. “Myself, when I heard Earl Scruggs, that was it for me. But when I was in my teenage years in high school – and that’s when I was really into music – all the other kids in school were listening to Elvis Presley, Jerry Lee Lewis and that ‘Blue Suede Shoes’ guy, Carl Perkins.”

McCoury claims that banjo player Scruggs (working with guitarist Lester Flatt) was a primary influence of his, along with Bill Monroe. “I think it’s just according to what young people hear when at a certain age,” he says. “It hits you like a ton of bricks, man. And then you can’t let go of it. But I’m not sure about [who influenced] these boys, because they’re a lot younger.”

Perhaps McCoury’s just being modest. When asked about their influences, the Rangers are unequivocal. “The Del McCoury Band has been my favorite bluegrass band since I first started learning to play my instrument in college,” says mandolin player Michael Guggino. “I’ve always appreciated how he and his band have had one foot in the traditional bluegrass world, and one in the progressive.”

The Rangers’ banjo player Graham Sharp believes that McCoury has “been making the best traditional bluegrass anywhere for a long while now.” He singles out Del’s voice for special praise: “He’s always been lonesome, but somehow it makes you smile.”

Lead singer and guitarist Woody Platt echoes his band mates’ sentiments. “Del is a bluegrass hero of ours; he and his band have influenced us as much or more than any other bluegrass group. I love how Del has maintained his traditional roots but has been able to cross over to a wide variety of fans.”

Asked for his perspective on the reasons behind the resurgence of bluegrass in popular culture – especially among younger audiences – McCoury notes that he views bluegrass as an art form. But he goes on to contrast it with other kinds of popular music, like vocal pop. “For a teenager that stuff’s just too mild,” he says. “Those crooners will not hit a teenager; they just want some fire in it, you know?”

The three Asheville dates offered concertgoers a choice of experiences: the January 20 and 21 concerts were standing shows, while the sold-out Sunday performance had a seated audience. McCoury likes both kinds of shows. “The standing audience is usually louder,” he says. “They’re more vocal, and they’ll holler up requests and this and that. I like that.”

Other than his tours with mandolin player David Grisman, McCoury doesn’t do a lot of live dates without his own band. So the shows with the Steep Canyon Rangers are something special. Speaking about his live dates with Grisman, McCoury notes that “ if we mess up, everybody knows it. There’s nowhere to go! And it’s kind of that way with these boys, too.

“I’m always up for a challenge,” McCoury says, “and when you step outside of your own band, you get one.” He is looking forward to the excitement of being onstage with them. With a laugh, he adds, “But it might be drudgery for them guys.”