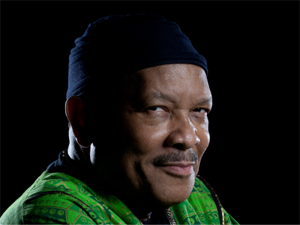 Few popular musicians have been successful at making a switch from one genre to another while holding on to a substantial fan base. Singer and vibraphonst Roy Ayers has done it, and more than once. Famously gifted a set of vibes mallets by bandleader Lionel Hampton, Ayers earned one of his first professional breaks as a member of Gerald Wilson‘s big band in the early 1960s. He went on to play with genre-hopping flautist Herbie Mann, most notably on the classic 1968 LP Memphis Underground. “Herbie worked very hard,” recalls Ayers. “He consistently made good, great albums.”

Memphis Underground was among the best. On that album, Mann bridged jazz, rock and soul, and Ayers sparred musically with hotshot guitarists Larry Coryell and Sonny Sharrock; many decades later, Sharrock would lend his gonzo guitar work to the Space Ghost Coast to Coast theme song. “Those years we shared together were great,” says Ayers. “Sonny was fantastic; Larry’s a cooker!”

But not long after, Mann decided to head in a different, less musically challenging direction. “He wanted to go into a much mellower groove,” Ayers recalls. “And he did very well with that.” Ayers took the opportunity to start a band of his own, Ubiquity. At its best, the group rivaled other top bands working in the new jazz-rock fusion idiom. But looking back, Ayers is characteristically modest about those recordings. “I was just playing music,” he says.

Ayers does admit to having been single-minded in his musical pursuits. “I did a lot of recording; more than the average guy,” he says. He once kept a session going for 27 hours straight. “I used to wear engineers out,” he laughs. “I didn’t try to do that; it just happened that way.”

By the mid 1970s Ayers had shifted styles again, making smooth r&b. His 1979 track “Don’t Stop the Feeling” was a Top 10 single on Billboard‘s Hot Disco/Dance chart. And he’s remained very active; Ayers has released nearly 60 albums, and lent his talents as a sideman to countless others. He’s worked on projects from Afrobeat/world to hip-hop, jazz, soul and pop.

In the hip-hop era, many of Ayers’ funky tracks were sampled. Bits of his music have found new life – and listeners – in tracks by N.W.A., Common, Dr. Dre and literally dozens of others. Asked if he gets the proper royalties for those samples, he laughs. “I have lawyers for that,” he says.

Along with Stevie Wonder and other prominent Americans, Ayers was a key activist lobbying in favor of the Martin Luther King Jr. Day national holiday. His relationship to Atlanta music goes back many years; Ayers has appeared at past National Black Arts Festivals and Atlanta Jazz Festivals. For his two-night run at City Winery Atlanta in January, he was joined by a cast of Atlanta musicians. Ayers has enjoyed previous City Winery shows, like a recent sold-out set in Chicago. “These people … they love wine, and they love my music,” he says. “I enjoy it too.”