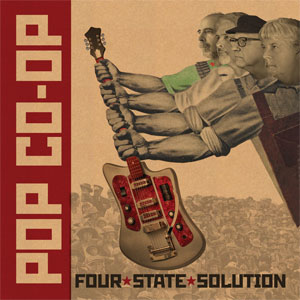 Pop Co-op – Four State Solution
Making an album via file sharing – instead of the old-fashioned method of gathering in a studio – is now a well-established practice. The title of this set refers to the approach used to make it. Steve Stoeckel’s name will be familiar to pop connoisseurs; he’s the longtime bassist/vocalist in the Spongetones. Here he collaborates with three lesser-known yet talented pals in a truly collaborative effort; think of Todd Rundgren’s four-man Utopia as a precedent. Those who loved the more rocking end of the ‘Tones catalog will delight in this set, but there are plenty of lovely, quieter moments, too.

Bravo Max – Bullfighter Blues
Oddly enough, this Dallas band made a stylistic shift that runs against the current. Instead of a rock band cyncically deciding to cash in on the Americana bandwagon, Bravo Max started out as Americana, and now they’ve gone full-on rock. In their song you may hear hints of Badfinger, Jethro Tull and the Long Ryders. Surprisingly diverse, Bullfighter Blues is well worth seeking out.

Louden Swain – No Time Like the Present
This fiercely independent band has managed to have it both ways: everything about No Time Like the Present suggests the support of a major label: tight, radio-ready songs, superb production and nicely layered (but never fussy) production values. With hints of mainstream 90s rock, Louden Swain is the “house band” for the long-running TV show Supernatural.

Split Single – Metal Frames
Initially, the band name confused me; I expected a two-song CD feature two different bands. Nope. This is arena-flavored melodic rock, the kind that briefly ruled the airwaves in the “Alternative” era circa 1993. I don’t know how much of a market exists for this kind of thing, but if you dug, say, Gin Blossoms and Michael Penn, you might want to seek out this one.

Vivian Cook – The Long Shot
Shimmering pop of the Bangles variety is the order of the day on this disc. Your enjoyment of Vivian Cook will likely be dictated to a large extent the degree to which you enjoy her distinctive vocals. The songs themselves are pretty irresistible, and her harmonies and lyrics are superb. Alternatively inward-looking and rocking-out, The Long Shot is a solid, promising debut.

Timothy Monger – Amber Lantern
If Sufjan Stevens and Ben Folds somehow had a kid, he might sound a bit like Timothy Monger. Catchy melodies, baroque arrangement touches and a voice that’s more than a bit reminiscent of Michael Bublé (of all people) are the hallmarks of this disc, but there are touches of R.E.M. influence here and there. Fans of Andy Reed would do well to lay hands on this disc. Recommended.

Thornetta Davis – Honest Woman
When it comes to present-day blues albums, only about one in ten (or less) makes the cut here at Musoscribe. That alone should tell you that I think Honest Woman is pretty damn good. The opening track throws down the gauntlet, and Davis – backed by a crack ensemble that avoids the dread facelessness endemic to most current outfits in the genre – is a convincingly authentic and heartfelt vocalist.

Eric Ambel – Live: Vol. 1
For those who wrongly insist that nobody makes real rock ‘n’ roll any more, I present this live album form Eric “Roscoe” Ambel. His no-bullshit approach suggests the Blasters, Smithereens and other revered names in real rock. A tidy collection mostly of originals, the set also features a couple of tune written by national treasure Jimbo Mathus, and one by living legend Swamp Dogg.

Southern Avenue – Southern Avenue
As many lovers of American pop music will know, the venerated Stax label was shuttered in the 1970s. But parent label Concord – owner of the Stax catalog – reactivated the imprint some time ago for occasional new releases. Southern Avenue is (of course!) a Memphis-based group that effectively evokes the Stax aesthetic of old. Think of a female-fronted North Mississippi All-stars and you’ll be on the right track. That might not be Steve Droppero n guitar (in fact it ain’t) but his inspiration is clearly in evidence. Highly recommended.

Cindy Lee Berryhill – The Adventurist
The back story for Berryhill’s return to songwriting is a sad one; The Adventurist was inspired by the death of her husband. But the record has plenty of upbeat moments. Fans of Aimee Mann and/or Liz Phair who don’t mind some subtle flourishes of Americana mixed in with their rootsy rock will delight in this album. The string arrangements suggest Big Star’s elegiac Third in places, and you can’t do much better than that.

Mark Whitfield – Grace
Typically, anything that falls into what could be considered the smooth-jazz category earns my ire and derision. But while this understated album is nominally smooth, there’s a playful and accomplished undercurrent to it. Sure, on one level, the tunes could work during “Local on the 8’s” segments on the Weather channel, but so too do they stand up to closer listening. Whitfield’s a master guitarist, and clearly doesn’t feel the need to wave that in front of listeners. But listen carefully and … wow.

Major and the Monbacks – s/t
In the time between my receiving this disc and getting ’round to writing about it, the band has signed with the tastemaking Yep Roc label. That alone is a trademark of quality. The group’s music a kind of soulful, rootsy rock that occasionally suggests Tedeschi Trucks Band. The group has the good-time feel of a jam band, but – thank the skies – without the endless noodling.

Peter Bruntnell – Nos da Comrade
Shades of R.E.M., Gin Blossoms and a dash of John Hiatt can be found on this set, all shot through with a lovely Merseybeat lilt that suggests A Hard Day’s Night-era Beatles. There’s plenty of Tom Petty-styled jangle and shimmer on the guitars on the electric-leaning tunes. The more acoustic-based songs are good, too, in their own way. Bruntnell’s sandpapery vocals give just the right amount of melancholy and grit to the catchy melodies. The vaguely sinister minor-key “Yuri Gagrin” is among the disc’s many highlights.

Gretchen’s Wheel – Sad Scientist
From what I’ve gathered, Lindsay Murray almost didn’t make this album; the Tennessee-based power pop/Americana artist was on the fence for some time as to the viability of another album. We owe her thanks and congratulations for making the right call: Sad Scientist is yet another album filled with her soul-stirring vocals and ear candy melodies. Though Murray is firmly in charge of the music, the collaborators she’s chosen say a lot about her taste: Fernando Perdomo, Andy Reed, Ken Stringfellow. Those are all names that command respect, and on Sad Scientist, Murray once again demonstrates that she’s every bit their equal. More, please.

That concludes this round of quick reviews of new material. Tomorrow I’ll take a look at 10 archival, compilation and/or reissue albums of note.