The hypnotic, deep-groove funky soul of The Nth Power is a big draw on the jam band circuit. On the group’s web site, the New Orleans-founded quartet claims that it’s “on a mission to share the light.” There’s no doubt that the group’s music is designed to uplift the listener; that goal is accomplished as much through the group’s engaging arrangements as through the thoughtful, contemplative (and often spiritually-focused) lyrics of its songs. Musically, the group has been variously described as “a cross between Steely Dan, the Doobie Brothers and the Isley Brothers” (Okayplayer.com) and “a gospel-funk blend of the sacred and the profane” (Burlington Free Press).

The group emerged as the fruitful result of what was initially thought of as a one-off jam at the 2012 New Orleans Jazz Fest. Backing trumpet player Jen Hartswick (who’s also a member of Phish guitarist Trey Anastasio‘s “solo” band), the four original members immediately recognized the potential they would have as a team. The Nth Power quickly coalesced around those core members. 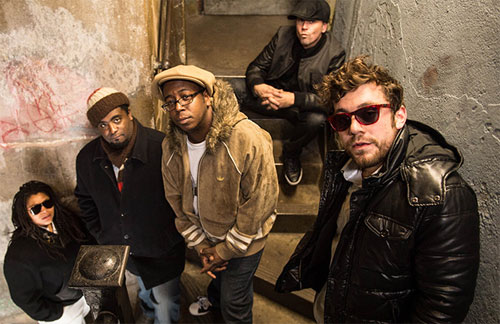 Vermont native and guitarist Nick Cassarino lives in New York City; his varied musical background was initially in free jazz and gospel, but years of regular live gigging moved him in the direction of more popular styles like r&b and funk.

Drummer Nikki Glaspie more than earned her street credibility as drummer for Beyoncé Knowles; Glaspie spent five years in that capacity, during which time she took part in a world tour. Glaspie was, for a time, also the drummer in Ivan Neville‘s New Orleans-based funk-jam band Dumpstaphunk. Bassist Nate Edgar has a long and impressive pedigree as well, having held down the bottom end for Groovechild, Dub Apocalypse and many other groups.

New Orleans native Nigel Hall rounded out the original lineup, and the keyboardist served as the charismatic and soulful front man on the quartet’s earliest recording. The first release from The Nth Power was 2013’s Basic Minimum Skills Test. Nominally an EP, the six-song disc ran over a half hour, and introduced listeners to the group’s carefully-crafted yet loose-feeling musical approach. Deeply soulful tracks like “Spirits,” “Feel” and “ I See Love” established the band’s direction; the voices of Hall and Cassarino blended seamlessly atop a kinetic musical underpinning.

The group endured a potentially major setback when acclaimed keyboardist and vocalist Nigel Hall left The Nth Power, first to play with Lettuce and then to pursue a solo career. Hall’s replacement is Courtney J’Mell Smith, an accomplished keyboardist whose work bears the influence of jazz-funk master George Duke.

But The Nth Power rebounded quickly. 2016 has seen the release of not one but two albums from the group. The studio album Abundance was released in November, and the change from the earlier EP is evident. Cassarino takes the spotlight as lead vocalist, giving the group a signature sound that now leans a bit more in the direction of jam circuit favorites like the Dave Matthews Band. The soulful element remains very much at the center of the group’s music.

Released simultaneously with Abundance is a live set, To Be Free: Live. The nine-tune recording captures the highlights from a pair of July dates in Boston and another in Brooklyn. Remarkably, only three of To Be Free: Live‘s songs are live versions of Abundance tracks (and none are from the 2013 EP); instead, the live album is primarily made up of new material, demonstrating the group’s wealth of creativity.

Back in March 2016, The Nth Power traveled to Asheville, N.C.’s Echo Mountain Studios; there they cut an hour-long installment for the Echo Sessions Youtube series. That set featured Ghanian djembe master Weedie Braimah joining the band as a short-term fifth member, and previewed songs from Abundance. While the Echo Sessions set features a well-behaved in-studio audience – thus not fully capturing the excitement and exuberance of live concert by The Nth Power – it’s an excellent instruction to the band, and can serve as a subdued preview to the group’s live shows.

The band’s most recent tour brought The Nth Power to venues in the Southeast, Texas, the Southwest, California and the Pacific Northwest, all in just over six weeks.