Amy Black didn’t set out to showcase the music of Muscle Shoals, Alabama’s FAME Studios; things just worked out that way. “It wasn’t planned,” she says. “It was kind of organic.” Black originally planned to record most of her 2014 album This is Home in Nasheville, and then do a few tracks in Muscle Shoals with famed keyboardist Spooner Oldham.

“But we nailed that album in Nashville, and really didn’t need the studio time” in Muscle Shoals, Black recalls. But since the studio – and Oldham – had already been booked, Black went to the small Alabama city anyway. The result of those sessions was an EP, The Muscle Shoals Session. That four-song set actually came out ahead of This is Home, and the experience of making it whetted Black’s appetite for classic southern soul. 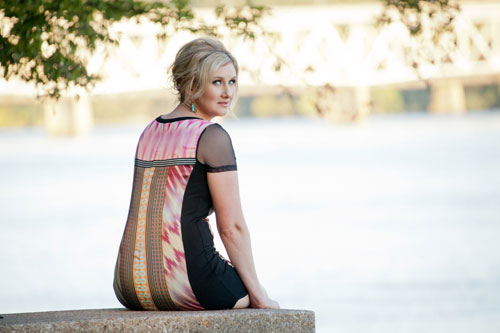 The FAME studio was something Black took for granted as a child. She grew up not far from Muscle Shoals, and passed the nondescript building countless times. “It was on the corner of a major intersection where my grandparents lived,” she says. Though Black had seen the outside of the building, she didn’t know the story of what went on inside until she had grown to adulthood.

The Muscle Shoals tunes were originally a side project for the singer, who relocated not long ago from Boston to Nashville. “But it turned into something much bigger for me.” Black eventually returned to Muscle Shoals – again with Oldham “at the same Wurlitzer that he had played when he was 19 years old,” Black says – and cut additional tunes to make an album, The Muscle Shoals Sessions, released in 2015.

That second set of sessions was informed by a different sensibility, says Black. “By that point I had already done a bunch of Muscle Shoals Revue shows,” she says. Though her original work on This is Home and three earlier albums shows Black’s bluegrass/Americana side, she says that the music of The Muscle Shoals Sessions has “become such a part of who I am, how I sing and what I do that I don’t even think that much about it.”

The songs on The Muscle Shoals Sessions – and in Black’s live Revue – are a mix of well-known and little-heard gems, covers of songs cut decades ago at FAME, the same studio where countless legendary musicians recorded. Some of the singers and players who cut tracks at FAME include Etta James, Wilson Pickett, Duane Allman, and (much more recently) The Drive-By Truckers.

Black has a long list of FAME-based songs from which to choose. “I have to feel excited about the song on some level,” she says, “whether it’s a ballad or a high-energy song. Ultimately, I have to be happy singing it night after night; I have to feel like it’s something that I can really make my own.

“Honestly, and with all due respect to the original people who recorded them,” Black says, “when I sing them, they’re my songs.”