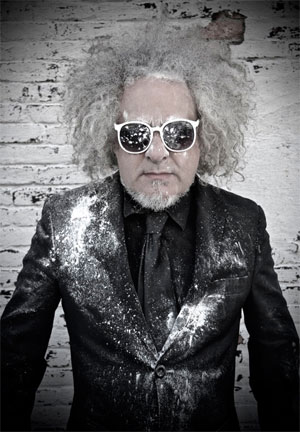 Note: An edited version of this feature appeared previously in Brooklyn Paper. — bk

Described as an “electro-acoustic” artist, Brooklyn-based Sxip Shirey is tough to pin down musically. Read about him most places and you’re likely to come away thinking his music is cerebral, experimental and more than a little avant-garde. Actually listen to the music, and you may be surprised to learn that it’s got a groove and is quite melodic.

“I’m not writing music to be smart,” Shirey insists. While he sees the value in music as a purely intellectual pursuit, that’s not his goal. “I’m a smart fucker,” he laughs, “and I definitely use conceptual techniques for my music, but I’m actually just interested in, ‘Can you write a fucking good song?’” To him, the best music communicates with people. He says that he would welcome a situation in which he’s told, “Hey, Sxip, there’s a bunch of plumbers out there, and you have to sell this to them.”

Though he’s involved in myriad pursuits – including a compelling walk-through musical work called “The Gauntlet,” performed in New York and Fredrikstad, Norway – Shirey’s latest effort is the album A Bottle of Whiskey and a Handful of Bees, released January 13. The album’s premiere was celebrated with a show at National Sawdust in Brooklyn.

The album features guest vocals by Rhiannon Giddens and Xavier, both of whom performed at the release show. Shirey first met Giddens when his “klezmer punk” collective Luminescent Orchestrii collaborated with the Carolina Chocolate Drops on an EP. “We started as admirers, then collaborators,” Shirey says, “and then it turned into a friendship.”

Shirey met r&b vocalist Xavier through a mutual friend. Shirey notes that he writes specifically for the singers he uses. “I wrote from a gay perspective on Xavier’s songs. I had these partially-finished songs,” he recalls, “and I had been talking to Xavier a lot about situations he was in. It was really easy to write the rest of the lyrics.”

He describes that work: “I breathe in and out of another person’s lungs, internally miking my mouth; they loved the piece at TED.” Commenting on a YouTube posting of that piece, Shirey summed up his work in perhaps the most succinct manner possible: “Some of you will get what I am doing … and some of you will still think I’m full of shit!”

You may also enjoy my review of Shirey’s new album.

Aaaand … you may also enjoy a review of Sxip Shirey’s National Sawdust show — the one I previewed here — written by my friend Nick Stubblefield.