Album Review: Sxip Shirey — A Bottle of Whiskey and a Handful of Bees 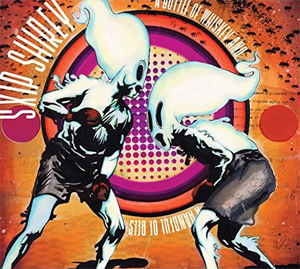 A quick written description of the music made by Brooklyn-based Sxip Shirey might leave the reader with the wrong impression: he often makes music using found objects right alongside what one thinks of as traditional instruments. Moreover, the latter category is populated by a lot of synthesizers. Some of his live events seem to draw from the Fluxus movement of the 1960s and ’70s. But this self-described electro-acoustic artist is deeply committed to groove and melody. As a result, A Bottle of Whiskey and a Handful of Bees strikes the perfect balance between art- and dance-pop. Guest vocals from darling of Americana Rhiannon Giddens (“Woman of Constant Sorrow” and two others) and Xavier (“Cinnamon Stick” and “I Got a Man”) are highlights, but the entire 17-track album of instrumentals and treated vocal tracks is a brilliant synthesis of styles.