Album Review: Sun Ra and His Arkestra — At Inter-Media Arts 1991 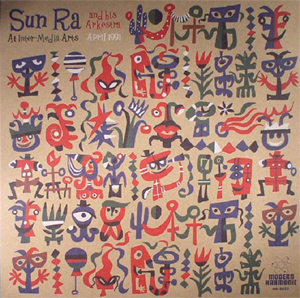 Sonic explorer Sun Ra was quite prolific during his lifetime; in fact archivists – those you’d expect to know – can’t accurately tally just how many albums the man released. And long after his death, reissues and newly-discovered recordings come out with surprising regularity.

Sadly, some of the latter tend toward poor fidelity; their importance may not be thusly diminished, but their utility tends more toward historical import than anything approaching listening pleasure. Which isn’t to say that Sun Ra was ever what anyone would call “easy listening.” His admixture of bluesy, swinging jazz, electronics and avant-garde textures can be foreboding for the musically timid or unadventurous.

Thank goodness this new release scores high marks on all counts. It’s weird, to be sure – this is Sun Ra, after all – but it’s a superbly-recorded live date, one in which all of the instrumentation and vocals are crystalline. In fact the New York City performance was broadcast over the air on WNYC radio.

Longtime Sun Ra associate June Tyson provides here soulful and nimble vocals, sometimes harmonizing with Michael Ray, abetted by several male vocalists. A sixteen-piece band takes the assembled audience on a musical trip through Sun Ra’s cosmos. It’s several minutes into the set before we’re treated to a solo, but it – and the others that follow – is worth waiting for.

The set list is trademark Sun Ra: a mix of originals and his own reinventions of works by other notable composers (Duke Ellington, Johnny Mercer). And a Sun Ra favorite, “We Travel the Spaceways” closes the set and provides some conceptual continuity with two other releases from Modern Harmonic, Space Songs and Man in Space with Sounds (both reviewed separately, and neither having the slightest to do with Sun Ra).

Sometimes half the band seems to be playing a different piece than the rest of the musicians; that tonal clash is often precisely the point. At its best, Sun Ra’s music always challenged the listener’s notions about what did and didn’t “work,” and the 2CD At Inter-Media Arts 1991 is an exemplar in that regard. That it’s of such high fidelity and superb performance makes it even more highly recommended.