Guitarist André Cholmondeley visited Asheville as early as 2001 when his Frank Zappa tribute band Project/Object played a show at Stella Blue (now the Asheville Music Hall). By 2006, he had moved here from New Jersey, and his career had taken a major, unexpected turn. In the space of just a few years, he went from just playing the music of his rock heroes to working with many of them.

As a guitar tech and tour manager, Cholmondeley began working with a succession of top-notch names in music. By 2011, he was the technician for Yes guitarist Steve Howe; he toured Europe and the U.S. several times with the band, and just wrapped up a February tour with the group. 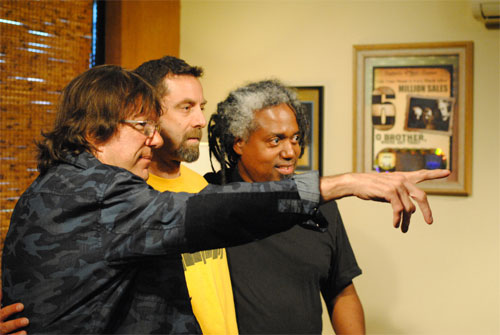 Cholmondeley’s move into tour management and “teching” happened by chance. One day in late 2006 when he was still in New Jersey, he was chatting with a friend, sharing plans for the coming weekend. “I’ve got this gig I’m supposed to do, but I’m too busy,” Cholmondeley’s friend told him. “I’m supposed to go ‘tech’ for Al Di Meola … hey, you should do it, André. They’re looking for someone for the weekend.” Cholmondeley demurred, thinking he wasn’t qualified for the job of the jazz guitarist’s onstage technician, or even working as a member of his road crew.

But that evening, he gave the opportunity some thought. And then he realized, “Wow – I’ve actually had the training for this!” His years leading Project/Object found him handling most or all of the duties this one-day gig would require, even though he hadn’t been doing them in an official capacity.

The next day, he got in touch with Di Meola’s assistant, and fielded a barrage of questions. He recalls his answers. “I’m not a luthier, but yes, I can set a guitar up. I can change the pickup, I can change the jack, tune the guitar, set up amps, et cetera.” He was told, “Okay. We’ll see you. Just come to this address on Friday afternoon.”

Literally overnight, that one-day gig turned into an international tour. “I learned a lot from Al,” says Cholmondeley. “It was a trial by fire. He’s definitely a perfectionist, a stickler.”

What’s more, Cholmondeley soon realized that life on the road with Project/Object meant that he had the skills and experience to be a tour manager, too. “I didn’t know it – and I didn’t call it that – but because I was the band leader, right away I was figuring out the money, renting the van, booking the hotels.”

By 2011 Cholmondeley began working for Yes’ Steve Howe; the February 2017 tour is his fourth with the group. Along the way he got to know the band members quite well, so when founding member and bassist Chris Squire died in June 2015, the loss was both a musical and personal one.

Cholmondeley also worked closely with Greg Lake and Keith Emerson for several years. He toured with them together and separately, and was a technician at the final ELP concert in 2010. Cholmondeley can be seen onstage – albeit briefly – in the commercially-released DVD of that concert.

The chemistry between Cholmondeley and both men was obvious, and extended beyond a working relationship; when Emerson visited Asheville for the 2014 Moogfest, he spent most of his free time with Cholmondeley. And on Lake’s 2012 solo “Songs of a Lifetime Tour,” the guitarist made a point of introducing – by name – his technician/road manager to the audience. Both Emerson and Lake died in 2016.

The behavior of some artists can seem quirky or even intimidating to outsiders who meet them in person. Steve Howe, for example, won’t shake hands with strangers, lest he run the risk of damaging his hands. Like Emerson and Lake, he – and in fact most for whom Cholmondeley has worked, a list that also includes David Torn, John Wetton, moe., Derek Trucks, violinist Eddie Jobson and many others – has a reputation for being very demanding. “I think they’re all perfectionists,” Cholmondeley says. “And I have no problem with that,” he says. “That’s how we got those albums!”

Rather than advertising his services, Cholmondeley has been content to let his work speak for itself. “Every job I’ve gotten is because I met someone” while working, he says. “And they just know, ‘Hey, I worked with this guy on this previous tour, and he did a good job.’”

Cholmondeley has taken to heart the lessons he’s learned along the way. “I’m still in this balance,” he says. “I’m a musician, and I do guitar tech work.” Other than learning one’s craft, his rules for being successful working as a tour manager/technician are quite simple. “Be nice to people,” he says, “and do your job.”