That modern approach made itself manifest from Popović’s first American release, 2002’s Hush! Taking full advantage of her interest in – and skill at delivering – a wide array of styles, Hush! is most definitely not an album designed to pander to blues purists. The disc has a dozen tunes, three of which are composed solely by Popović; three others are co-writes. Those, along with a sampling of blues standards (including Buddy Guy‘s “Girl of Many Words”) collectively set the tone for Popović’s signature approach: a style that is rooted in the blues, informed by the blues, but open to other influences.

By the following year, Popović had released a follow-up, Comfort to the Soul. That set continues to have it several ways: traditional blues like an uptempo reading of the standard “Sitting on Top of the World” sits comfortably next to a cover of a Steely Dan deep album cut (Pretzel Logic’s “Night by Night”) and a  Popović-penned tribute to jazz bassist Jaco Pastorius. 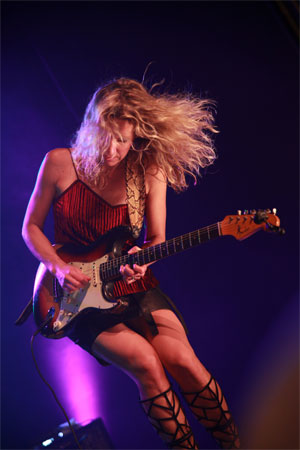 Popović ‘s 2011 release, Unconditional, courted a bit of controversy. On its cover, an apparently nude Popović stares straight into the camera lens, her “naughty bits” obscured only by the guitarist’s signature Fender Stratocaster and a bit of strategically-placed shadow. Once listeners got past the racy packaging, they would find another solid collection of music, highlighted by a strong reading of Nat Adderley’s soul-jazz classic, “Work Song.”

And in 2015, Popović released Blue Room, the first released musical collaboration between the guitarist and her single biggest musical influence: her father. Blue Room displays more of an Eastern European flavor than one finds on Popović’s other releases, but it’s still very much rooted in traditional (and electric) blues.

To date, Ana Popović  has released eight studio albums, a pair of live sets and two DVDs; each continues to explore the guitarist-singer’s varied musical interests, from the blues to soul to funk to rock, and eventually back to the blues once again. Noting that she has studied both jazz and world music, Popović insists that “I give myself absolute freedom to make music that comes straight from the heart. And the last think I want is to put a label on it.”

Labels or not, the latest Ana Popović release is yet another varied offering. Released last May, the 3CD set Trilogy presents the guitarist-vocalist in three distinctly different styles. The individual discs are subtitled “Morning,” “Mid-day” and “Midnight” and each has its own musical character. “ is the most diverse record I’ve ever done,” says Popovi?. “It’s all me, obviously, but it represents a different take on blues.” The album features guest spots from Joe Bonamassa, North Mississippi Allstars’ Cody Dickinson, famed drummer Bernard Purdie and rapper Al Capone.

The Trilogy project was carefully thought out. “I don’t make my moves overnight,” says Popović. “I put a lot of time into the concepts. It took me about three years to get the concept together.” Building on her previous studio experience, Popović applied all of that knowledge to the creation of Trilogy. “Nowadays when you go into the studio, you need to have 90% done in order to have a successful record. There is no more, ‘Okay, let’s just get into the studio and jam and see what happens.’”

Four different studios – and several different sets of support musicians – were used to make the album. “I wanted specific sounds,” Popović says. “I wanted exactly the horn section that’s going to be more soulful in Memphis for soul tracks, more funky in New Orleans for the funk tracks.”

Popović wasn’t intimidated by the risk inherent in releasing a 3CD set into a marketplace increasingly dominated by single-track downloads. “I thought this was maybe the moment, because everyone is saying constantly, ‘There’s no CD sales; let’s just put out a five-song EP.’ I said, ‘I’m going to prove different.’ If the product is good, people are going to buy it even if it’s twice the price of the regular CD.” 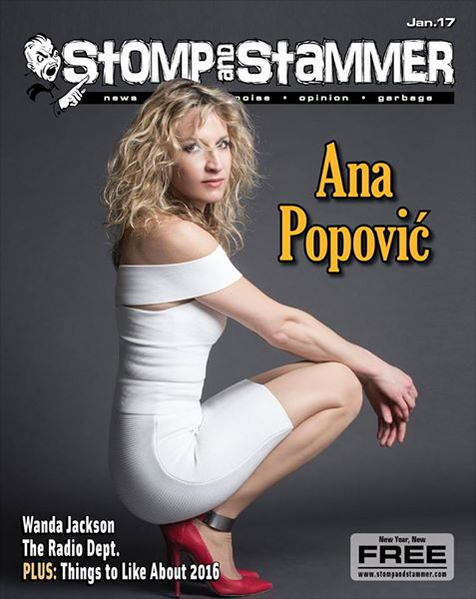 The guitarist admits that she wasn’t completely convinced Trilogy would come out the way she wanted. “I’m making the records for myself, because I’m my biggest critic. I know exactly what’s right about it and what could have been better. And  came – by far – the closest to my standards. Because I had the whole project in my hands.”

The award-winning musician – in 2003, Popović was the first Eastern European to be nominated for a W.C. Handy Award (Best New Artist Debut) – clearly enjoys the spotlight, but she’s happy to share the stage with other well-known and celebrated musicians. While Popović isn’t first female guitarist to be featured on the Experience Hendrix tour, she’s the most oft-appearing. Discussion of that project finds  Popović letting her guard down just a bit, revealing an otherwise suppressed competitive streak. Describing herself as “the only woman to be called upon four times” for the package tour, she makes a point of adding that other than her, none of the other female musicians “lasted more than one tour.”

Popović believes that she has developed her own style of playing guitar. “That doesn’t happen overnight; you need to work on it,” she says. From the beginning, she set out to learn from the recordings of greats like Albert King and Stevie Ray Vaughan (the latter is one of her major influences), but not to copy them. “I always thought it’s better to be different than just to copy other guitar players,” she asserts. “I think it’s important to insist on your own style. And then after so many years, you wake up with your own licks. And that’s a great feeling.”