Andrew Scotchie‘s Birthday Bash began three years ago, celebrating the Asheville singer-guitarist’s 21st birthday. The event has additional significance to Scotchie, but he’s kept that part of the story largely to himself, until now. The third annual Birthday Bash was held January 14 at Isis Restaurant & Music Hall, and featured Scotchie’s band, The River Rats, plus several guest stars.

To some attendees, Scotchie’s annual event might seem nothing more than a fun party with a top-notch lineup of Asheville-based musicians providing the soundtrack. In fact there’s a back story to the event. Scotchie says that the 2013 show “was the first time I actually played on my birthday. I noticed that it got a really good turnout, and people really enjoyed it.” But he was also beginning to come to terms with the connection between the anniversary of his birth and the anniversary of his father’s death. 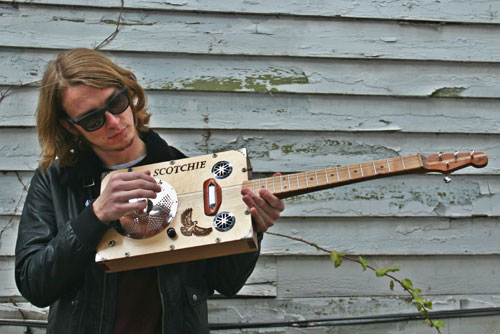 Thomas Scotchie had been shot and killed by a former employee at his business on Haywood Road on January 16, 2008, one day before his son’s 15th birthday. “Especially in the last few years,” Andrew Scotchie says, “I’ve realized how much my dad is a part of my story, my music, my lyrics, and my overall understanding of life.” So while he downplayed that part of the annual event, focusing publicly on its celebratory aspect, in truth Scotchie has always thought of the Birthday Bash as a tribute to his father as well.

“Try to imagine what this would be like,” Scotchie says. “I was just about to turn 15. I had a conversation with him at the dinner table the night before. Dad was a real family man.” The family shared dinner every night. “He worked, he came home. It was a very blue-collar situation,” Scotchie recalls.

Earlier that day, Andrew had gotten himself kicked out of a band. “I had jumped into a drum pit, broken something on stage … I can’t remember exactly what it was,” Scotchie says, laughing at the memory. “Just some teenager bullshit.” His father listened to him tell the story, and then replied, “Listen: Friends are going to come and go. Band mates will come and go. But family – me, your mom, your brothers, your aunts and uncles – we’re all going to be here for you forever.”

Andrew’s mom went on to raise him and his brothers on her own. “I really lean on her,” Scotchie says. And as he’s established and grown his musical career, Scotchie has taken the time around his father’s death and his own birthday – the beginning of each new year – as an opportunity to go forward with renewed purpose. “The Birthday Bash doubles as a way to remember a great person,” Andrew says. “someone who pushed me to enjoy life, treat people the best I can treat them and believe whole-heartedly in what I’m doing.”

But while Scotchie’s bash honors his late father’s memory, it’s anything but a solemn event. “As far as my heart and soul goes, it’s the best way for me to start the New Year,” he admits. “We just don’t play Asheville that much anymore. And whenever we do, we try to put together the best lineup possible.” Scotchie notes that he draws all of his inspiration from local artists.

This year’s event lineup included a set by the Patrick Dodd Band, with special guest Ashley Heath. “Them coming together onstage is something that doesn’t happen often,” Scotchie says. “Ashley’s one of my favorite musicians.”

Aaron “Woody” Wood played a set as well, in addition to guesting with The River Rats. “Woody was one of the first local artists that I actively went out and saw,” Scotchie says. “It just made sense to pull somebody in who’s been such an inspiration to me.”

Local charity Grateful Bread was on hand to collect winter clothing for those in need; they had a drop-off station at Isis. The bill also included appearances by David Earl and Jack Mascari. “Jack actually went to Asheville High School with my Dad,” Scotchie says.

Scotchie emphasizes that he chose musical guests who mean a great deal to him in his life and work. “But they’re also people who are benefiting the community and who have a connection to my father.

For years, I didn’t talk about all this,” he admits. “And then, quite recently I realized that there’s nothing to hide. It’s part of who I am. In my songs, I end up alluding to many things that my dad taught me, things that he said. So it only makes sense that he is honored throughout the process.”