Speaking of wanting (or not wanting) to know, around the time that the original Sneakers EP was released, the band couldn’t get many gigs. In fact, according to Unofficial Sneakers Historian and bassist Robert Keely, Sneakers’ 2016 reunion performance at the Hopscotch Festival in Raleigh was exactly the band’s ninth show ever. “So every performance is a very special occasion,” smiles Easter. “We know where we are welcome.” 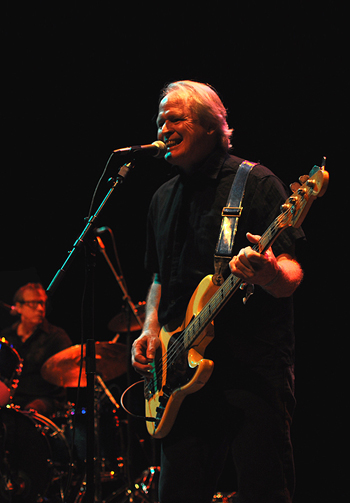 For at least one of the band’s eight previous live shows between 1976 and 2016, they weren’t greeted with open arms. Mitch amusingly recalls one Sneakers gig in particular, one during which he wasn’t in the band. “I remember seeing Sneakers play at the Apple Chill Festival in Chapel Hill. At the time, Chapel Hill was pretty much culturally dominated by hippies.” He readily concedes that the hippie movement was largely moribund by 1976 … but apparently news of its demise hadn’t reached Chapel Hill. “I loved the hippie scene in 1967,” Easter says. “But by this time it was getting kind of dreary.” That hippie vibe was blended with a kind of down-home southern ambiance; not exactly a recipe for acceptance of a power pop group.

“Anyway,” Mitch continues, “the famed Apple Chill Cloggers were up next.” Workers were already busy laying down plywood flooring in front of the stage, all while Sneakers were still up there playing and singing. “They were all holding their ears, like ‘Ohh!’ And these were young people! I just thought, ‘Fuck you.’”

But Mitch thought that scene was, in its own way, a great image. “It definitely reinforced the dangerous punk aspects of Sneakers,” he deadpans. “They really offended people, which is always what you need to do, right?”

Robert Keely remembers a few other details from Sneakers’ short list of live dates. “We played a street festival in Chapel Hill; we were so loud, they unplugged the PA.” And at the Connor Dorm Spring Fest – also in Chapel Hill; save for the Max’s gig, Sneakers don’t seem to have been able to escape the city limits – band friend and producer Don Dixon “played an actual car horn from the parking lot for the intro to ‘Driving’.” This was long before sampling, kids.

Alas, there was essentially nowhere for Sneakers to play. Everyone involved does recall a show at famed New York City club Max’s Kansas City. “It was quite exciting to play Max’s,” says Keely. He recalls that it was Sneakers’ “fourth, maybe fifth show ever.”

“That was very exciting,” Easter admits, “but it wasn’t part of a tour. It was just like, New York and then home.” In fact, by the time of that gig, Mitch was in the group. “I guess I was sort of brought into the band; I can’t remember, man …”

But the whole thing ended shortly thereafter. “Chris had been to New York City, and met and seen Television,” Keely recalls. Stamey moved to the City in January 1977. “I don’t know if Television are aware of their influence on Chris at that time,” adds Mitch. Stamey soon joined forces with Alex Chilton, playing bass in Chilton’s band. 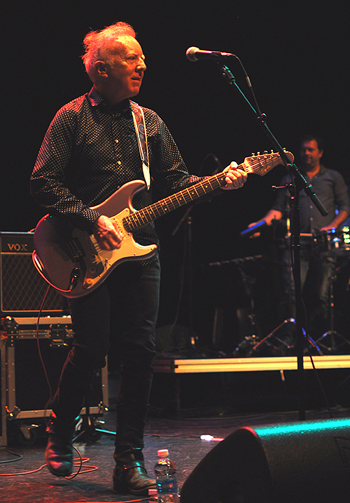 In the interval, Chris Stamey got The dB’s up and running. Peter Holsapple joined. They did a few excellent albums. Stamey left, and Peter carried on with Like This and The Sound of Music, wonderful despite Chris’ absence. Peter and Chris teamed up outside the group for a pair of superb albums, Mavericks and Here and Now, separated by a mere 18 years.

Meanwhile, Mitch opened Drive-in Studio in his hometown of Winston-Salem, NC, and played a key (again, he might say peripheral) role in developing and capturing the sound of early R.E.M. His own band, Let’s Active, cut a wonderful EP and album before fracturing; the second Let’s Active album was excellent as well, but – like Sneakers’ In the Red – not really a group project. Post-Let’s Active, he led a group called Shalini, and did more production work, including some of the best releases from Game Theory, yet another criminally unknown and underrated group. For his part, Keely enjoyed what he characterizes as “a very long retirement.”

More recently, around 2010 Mitch and Chris reunited for the Big Star’s 3rd concert series, along with R.E.M.’s Mike Mills and original Big Star drummer Jody Stephens (see how this all hangs together?). And in 2012, Stamey, Rigby and Easter (plus Holsapple) played at the annual SXSW Festival in Austin, billing themselves as The dB’s.

Returning now to the present …

“I can always kind of remember these songs,” Easter tells me backstage at Raleigh Memorial Auditorium, while – of all people – Television is doing an extremely loud sound check a few yards away. “And it’s weird, because they’re not songs I played very much.” He muses that Sneakers happened when all of its participants were at young and pivotal stages in their lives.

“It was right when we all sort of became adults. We were trying to really do rock music and it was kind of, sort of happening around this band a little bit.” They had made a record that got some attention, and – they had hoped – that would mean they could “break out of the three or four local depressing clubs that we could play, [places] where they kind of wished we’d go away.”

Mitch says that “to have it feel like a connection to the wider world was fantastic. And that’s all down to Chris’ efforts, his wherewithal to actually press this [record] up and everything.” Keely shrugs and adds, “All the deep philosophy and musical questions are best directed to the other players. I was just extremely fortunate to be a passenger on the bus who happened to be in the right place at the right time, with correct change.”

Some months earlier, the organizers of the annual Hopscotch Festival reached out to Stamey, asking if he’d consider putting Sneakers back together for a reunion gig. Chris had played Hopscotch a few years earlier with a recently-reactivated dB’s; that enthusiastically-received set included him, Peter Holsapple, bassist Gene Holder and Will Rigby (plus the very versatile Brett Harris as an auxiliary dB). So he said yes. 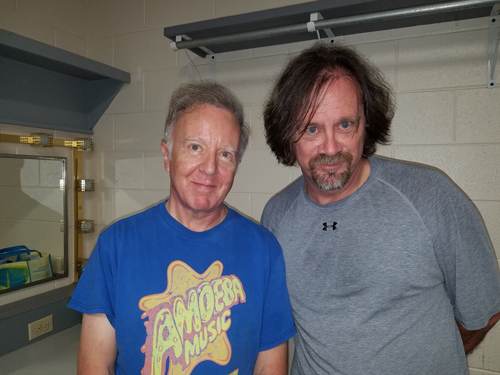 The plans for Sneakers’ Hopscotch set were to do songs from “the original ancient EP, and then a couple of other songs, a couple of newer ones,” Mitch says. I ask if the set will include the infamous “B&G Pies Commercial” track that showed up on Racket and Nonsequitur of Silence. “No. We got a cease-and-desist [order] from B&G,” Easter says. They told him, “We don’t want to be associated with punk.”

The Hopscotch show was a success; the band tore through the material as if the previous forty years had never happened, and Chris’ guitar didn’t break. So who knows? Maybe they’ll do some more shows. “It’s all about the money,” Mitch deadpans. Keely leans in and adds, “It has to be bigger Canadian dollars; physically bigger dollars. And in another time frame; another nine years seems about right.” Turning slightly more serious, Keely gets the final word. “It’s totally up to Chris, Mitch and Will. I’ll show up and know my parts if requested.”