Though they came to prominence in different eras, guitarists Steve Gunn and Lee Ranaldo have a shared musical sensibility. As co-founder of Sonic Youth, Ranaldo helped pioneer the mainstreaming of the 1970s New York-based “no wave” movement into popular musical culture. With one foot in the acoustic scene and another firmly planted in the electric guitar hero camp, Gunn is breaking new musical ground in the 21st century. The two guitarists have teamed up for a tour.

Gunn explains how the collaborative tour came about. “We both live in New York, and of course I’m a huge fan of [Randaldo],” Gunn tells me. Some time ago, they did a one-off show together. “We both performed solo, and we were chatting about how fun it would be to do a tour, because we had both been on the road quite a bit these past few years.” Both guitarists were interested in the opportunity to “pare down and get back to a more simple style of touring, bringing minimal gear but still playing all our songs,” Gunn says.

The stripped-down musical setting will allow the two guitarists to explore the possibilities of the acoustic guitar – both individually and together – outside the context of a full band. Gunn says that his set will focus on song-based material, but says that he and Ranaldo “definitely want to try to do some things that are more improvisational.”

Beyond that, Gunn sees the tour an a way for him and Ranaldo to “exchange ideas for collaborative opportunities.” After a full-band tour in support of Eyes on the Lines, his 14th and latest album, Gunn was ready to get back to playing solo, and says that “finally we both came to a point where it was a good time to do it.” 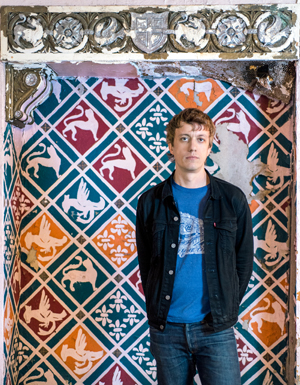 Though his music is often very accessible, Gunn comes from an improvisational background. He often mentions minimalist composer La Monte Young as an influence. Even within the context of the more pop-oriented material on Eyes on the Lines, Gunn’s interest in minimalist values like repetition comes through. Gunn says that he values Young’s ideas about “deep listening and appreciating Indian classical music and chromatic music.” He notes that repetition – particularly with percussion instruments – “can be healing and meditative, and can incorporate itself into all different kinds of things.”

Musical collaboration is nothing new for Steve Gunn. In the last decade, he’s recorded and/or performed with Hiss Golden Messenger, Kurt Vile and the Violators, The Black Twig Pickers, and Mike Cooper. All but the last of those are artists with whom Gunn had had a prior musical introduction. “I was familiar with Mike’s music, but I had never played with him before we recorded Cantos de Lisboa,” Gunn says.

“That was an interesting experience,” he recalls. “I had all these plans that were completely wiped out off the page once I actually ended up sitting down with Mike. He was like, ‘I don’t think I want to do any of that; let’s just play.’” Gunn says that freewheeling approach kept him on his toes; “Mike Cooper’s playing pulled things out of me that I don’t necessarily think I could have even thought of otherwise.”

That spirit of being open to the unexpected when making music is something Gunn values, and something he hopes to cultivate when he shares the stage with Lee Ranaldo. “I’m lucky enough to play with people who are acute listeners,” he says. “They really understand my weird sort of playing style, and can complement it really well, so it’s really fun to play with them.”

The January tour with Lee Ranaldo is currently limited to about a dozen dates in the Eastern U.S. and Canada. “I think that, for now, it’s a finite thing,” Gunn says. But he does hold out the possibility of more dates in the future. “Lee and I are going to look at our schedules for the year, “ he says. “I think it would be cool if we could try to do more at some point.”

But immediately after the current tour concludes, the always-busy Gunn will be on to his next project: beginning the process of making another record. “And I’m going to take my time with it,” he says. “These past two years have been non-stop, so I’m really looking forward to working on songs and getting good demos together.”

Gunn’s enduring collaborative spirit means that he’ll do more one-on-one projects, too. “I’ll be getting back into that a little bit this next year, and I’m really looking forward to that, too,” he says. “So it will be a shift; it won’t be a full push with a band and a van full of gear driving all over the world.”