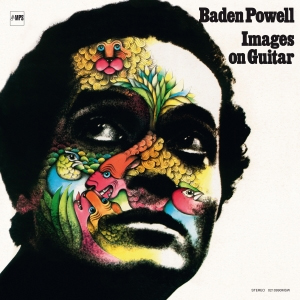 This 1973 album for MPS is listed on Wikipedia as a live recording; it’s “live” only in the sense that it was cut that way in the studio. Recorded October 1971 at MPS’ Black Forest studio, Images on Guitar features Brazilian guitarist Powell (born Baden Powell de Aquino) backed by Ernesto Gonsalves (bass), Joaquim Paes Henriques (drums) and Alfredo Bessa on atabaque and other percussion. Janine de Waleyne shares vocals with Powell.

Four of the tunes here are vocal-led, four are instrumental. One of the latter – “Sentimentos – Se Voce Pergunta, Nunca Vai Saber” is a Baden Powell solo. All tunes are very much in the acoustic Brazilian style made popular by Antonio Carlos Jobim, Powell and a select few others.

“Petit Waltz” is perhaps the disc’s most effective number: its first half features a finely-textured performance by Powell and Bessa; only after that has run its course does the rest of the band join in. Powell accents his precise and expressive chording with a bit of picking, but it’s mostly a showcase for the effective uses to which guitar chords can be applied.

The crystalline voice of Waleyne is equally evocative when warbling wordlessly (“Ate-Eu”) or singing in Portuguese (“Violao Vagabundo”). On the latter, she engages in some scat vocalizing; even if we don’t understand her language, the emotions come through loud and clear.

The most playful and upbeat tune on the set is “Blues a Volonté.” Its composers – Powell and Waleyne – smartly hybridize Brazilian musical forms with North American blues structure; the result is thrilling and invites repeat plays. It’s the clear highlight of Images on Guitar.

Powell’s solo “Sentimentos” slows things back down, presenting an intricate and pensive performance from the guitarist. “E de Lei” features a descending melodic line that gives Powell plenty of room in which to do some interesting things with his instrument; it’s also the least “Brazilian-sounding” tune in this collection.

Images on Guitar closes with the unimaginatively-named “Canto.” Thankfully the song is more creative than its title. With a Spanish feel, it’s mysterious and slightly foreboding tune with lots of space between the notes; those spaces – and Waleyne’s wordless vocals – only add to the mystery.

The 2016 reissue features a gatefold sleeve with black-and-white photos plus liner notes in German and English.