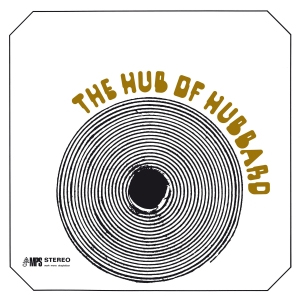 Don’t let the relatively generic cover art of The Hub of Hubbard dissuade you from checking out this 2016 reissue of an album originally released in Germany in 1970 (and in the US two years later). Cut in the Black Forest for the German MPS label, this four-tune set features trumpeter Hubbard blowing impressively while backed by pianist (Sir) Roland Hanna, Richard Davis on bass, and drummer extraordinaire Louis Hayes. (Eddie Daniels is on hand for tenor sax, too.)

The ensemble charges right out of the gate with Vincent Youmans‘ “Without a Song,” an example of deceptive labeling if there ever was one. It’s a song and a half. Hubbard and Daniels trade licks throughout.

Cole Porter‘s “Just One of Those Things” is controlled cacophony, a fine example of jazz’s technique of using a song as little more than a mere canvas upon which to paint an original work. All five players are in fine form as they blast full speed ahead through the seven-plus minute performance.

“Blues for Duane” – a Hubbard original composition – is sexy and swaggering, yet still somehow subtle. Davis’ bass holds things together nicely, and the tune has an even more “live” feel than the record’s other cuts.

Sammy Cahn and Jules Styne‘s “The Things We Did Last Summer” ends the album on a sultry, romantic note. A bit of (natural?) reverb on Hubbard’s horn lends just the right melancholy air to this understated piece. Hanna occasionally reaches inside his piano for some clever and effective strumming of the strings; that zither-like effect would be used to good effect at roughly the same time (1969) by Keith Emerson on ELP‘s “Take a Pebble.”

The album’s original gatefold sleeve is reproduced here, with a liner note essay in both German and English. Oddly, the essay doesn’t match up with the record’s sequencing, but that shouldn’t take away from the listener’s enjoyment.

Note that since this is a straight reissue of the original LP, the bonus track found on CD releases (Hanna’s “Muses for Richard Davis”) is not included here.