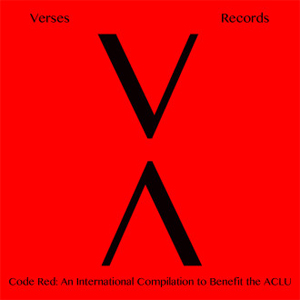 To many observers, statements by presidential candidate (and now President-elect) Donald Trump during the 2016 election cycle raised serious concerns. The reality TV star and purported billionaire made many public pronouncements that suggest a hostility toward free speech and civil liberties. From calling for bans on Muslim immigrants to “open[ing] up our libel laws so … we can sue [newspapers] and win lots of money,” Trump has caused alarm among those who value the civil liberties guaranteed by the Constitution. Responding to those concerns, Washington D.C. record label Verses Records has compiled and rush-released an album, Code Red: An International Compilation to Benefit the ACLU.

Released December 1, the digital-only Code Red is curated by Asheville musician Dave Harris (formerly the manager of Smashing Guitars) and features six local artists among the 40 musicians represented. “But the support has been far and wide,” Harris says, noting that several of the artists appearing on Code Red are from outside the U.S. “Six countries are represented; it’s truly global.” All proceeds from the sale will go to the American Civil Liberties Union.

“The idea for Code Red came to me the day after the election,” Harris says. “I really liked the ACLU’s first post-election response: ‘We’ll see you in court.’ So many things proposed during the campaign were, I think, unconstitutional. And un-American, quite frankly.” Harris notes that he and Verses Records are – like the ACLU itself – nonpartisan, and he believes the issues at stake transcend party politics.

Harris’ initial thought was to join the ACLU. And then he thought, “Maybe I could do a little more.” He considered organizing a benefit concert. But then the idea of a compilation album came to him; it would have the advantage of being put together relatively easily and quickly, and would allow involvement and support from like-minded people well beyond Asheville.

In his capacity as part of the Verses Records organization, Harris reached out to his contacts within the local, national and international music communities. The response was swift and decisive. “In no time at all, I had artists from all over the world committed to help out,” he says. All of the musicians involved provided their recordings without compensation.

As the album’s Bandcamp page notes, Code Red was “22 days from conception to release.”

“It needed to happen quickly,” Harris says, “as a show of solidarity.” The plan is to collect the proceeds from Code Red sales, and make an initial donation to the ACLU on a date with special significance: January 20, 2017: Inauguration Day. Harris’ initial goal for the project is to raise $1000, and a week after Code Red‘s release date, sales were already halfway to that goal. Additional donations will be made as sales of the album continue, Harris says.

Unlike some compilations with a cause, the songs on Code Red aren’t all pointed lyrically; many are instrumental. “The artists all asked me what I wanted,” Harris says. “I told them that I wanted music that represented how they felt about the current situation. It’s their call. I’m an artist, too; I’m not going to tell anybody how to conduct their art.”

The tracks on Code Red are a mixture of previously-unreleased songs, new recordings, and what Harris calls “boneyard” recordings, unfinished or abandoned works. “All of us artists who record have boneyards. And within that, you find some really interesting things.”

There isn’t a specific Asheville event to promote Code Red, but a few of the Asheville-based musicians taking part in the album had local dates in the days or weeks shortly after the compilation’s release. 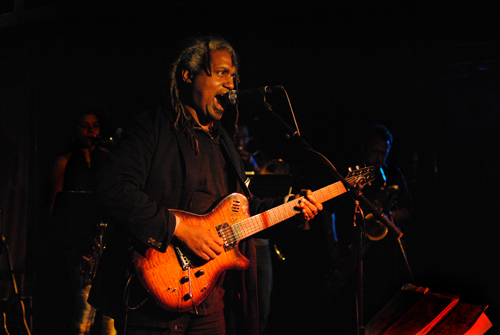 IT CAN’T HAPPEN HERE: Asheville musicians including André Cholmondeley (pictured above) are among those contributing their talents to “Code Red,” a new compilation to support the work of the American Civil Liberties Union. Photo by Bill Kopp

Divine Circles‘ Meg Mulhearn (“Hymn”) was awarded a 2016 Regional Artist Project Grant from the Asheville Area Arts Council; Mulhearn was a guest performer at the release party of the Yours Truly album Holophrase, January 7 at the Mothlight.

Nationally-touring modern psychedelic/motorik band Nest Egg contributed the heady rocker “Write Thus Snake” to Code Red. Other Asheville artists featured on the album include Shane Parrish (“I know that I was complacent, but now you can expect a visit”), Xambuca (“Lamprophony”), and Code Red‘s project curator Dave Harris (“Swarm,” on which he’s billed as mrscientificterms, and a collaborative work with Italian artist Bicho Raro, “Burn All Borders”).

Code Red isn’t the first benefit project for Verses Records, and if Harris has his way, it won’t be the last. He says that the Verses Record crew sees their label as “a platform to fight for the things that we believe in.”

“In my world, things happen,” Harris says. “And I’ve already put pen to paper on our next release. Don’t be surprised to see Verses drop more benefit compilations.”