The New Mastersounds have a long-standing and close relationship with music fans in Asheville. Founded in Leeds, England in 1999, the soul jazz / fusion / funk band played its first Asheville date more than 8 years ago, at the Grey Eagle. Since that time, the group has returned more times than the musicians can count, gaining fans along the way. The New Mastersounds wrapped up their 2016 touring schedule with their first-ever Orange Peel date on December 17.

“We’ve just always had such a great time in Asheville,” says guitarist Eddie Roberts. “From the first time that we came through. we had a great audience.” He says that’s not the case everywhere the group goes. “A lot of towns, the first time [through] we were playing to no one, or to 20 people. But when we came to Asheville, it was a kind of ready-made audience there waiting for us.” 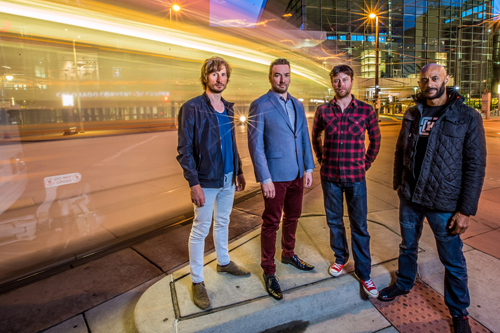 The jury’s out – even among the band itself – whether the New Mastersounds are a “jam band.” In an April 2016 interview, this writer came down on the “no” side; Roberts replied, “I’m glad you say that.” A mere seven months later, the guitarist seems to have accepted the inevitable. “I guess at this point we have to admit that we are a jam band,” Roberts laughs. “We’ve existed longer in the jam band scene than we existed without it. So maybe the scales have tipped.”

There’s good reason for the confusion. On one hand, a trademark of The New Mastersounds across their twelve-plus studio albums is a tight, concise approach to instrumental funk of the kind New Orleans legends The Meters made. On the other hand, live onstage, The New Mastersounds open things up. “We’re coming away from our early days as a British band where every song was three and a half minutes long,” Roberts says. Mentioning a recent set that ran in excess of two and half hours, Roberts explains, “When we’re feeling the right mood, we just keep playing until we fall over.”

Though they’re a four-piece – guitarist Roberts plus Pete Shand on bass, drummer Simon Allen and keyboard player Joe Tatton – the group has often expanded with extra players, invited guests to collaborate onstage and in the studio, and even traded songs and personnel with other groups.

The New Mastersounds have done that trading on their latest release, a “split single” with New York City-based funksters Turkuaz. The A-side features the group playing Turkuaz’s “The Rules,” with guests from the NYC band helping out. The flip side of the limited-edition 7” record is Turkuaz playing The New Mastersounds’ “On the Border,” and features members of Roberts’ band.

That collaboration extends beyond the single: on the current tour, The New Mastersounds co-headline with Turkuaz. Roberts says that the shared tour is “a logical thing to do; musically, it’s such a great fit. There’s a certain amount of crossover with our audience.” Turkuaz attracts a slightly younger demographic. “So [the tour] is introducing our audience to theirs, and vice versa,” Roberts says. “Musically, it’s very complimentary. Every night we get a few of those guys up onstage, and we get up onstage with them.”

The group has a massive repertoire from which to draw, and though the quartet uses a set list, Roberts sometimes calls an unplanned tune. “You’ve got to get a vibe for the kind of grooves that people love,” he explains. “Sometimes you play a groove and people are standing still; you hit another groove, and they all come alive. So I might tweak it whilst we’re onstage, and kinda go, ‘Okay, these guys like it a bit more uptempo,’ or ‘These guys like more of a four-on-the-floor groove.’ I can direct the band in that way.”

That spontaneity is a hallmark of the band’s studio work as well. The New Mastersounds will record their next album in Roberts’ adopted Denver hometown in February. “We go in totally fresh,” he says. “We write in the studio, and record it there and then, usually in the space of a week.” Then Roberts will mix the recordings, and send his band mates the finished product. “They won’t have any recollection of having made that music,” he laughs. “They have to go about learning the songs so that we can add them to the set.” Once the band is on the road, they’ll choose one of those new songs, and run through it during sound check. “Then we’ll put it in the set that night,” Roberts says.

“If you listen to a tune that we recorded in the studio, that’s the second or third time we’ve ever played that tune” says the guitarist. “Then we play it out on the road for five or ten years … eighteen years in some cases. And the songs end up changing, evolving.”