The Verve Pipe Learns From its Mistakes

The Verve Pipe got its start in Lansing, Michigan in the early 1990s. Led by singer-guitarist Brian Vander Ark, the group got its first big break when RCA signed the band to a multi-album deal. The Verve Pipe’s first RCA album, Villains, went platinum (one million units sold) and spawned four Top 40 hits on various charts, most notably “The Freshmen.”

Noticing that as the primary songwriter Vander Ark made the most money from The Verve Pipe’s success, the other band members now wanted to write songs, too. “Even though we all gave each other a percentage no matter what was written, I [earned] the lion’s share from Villains,” Vander Ark tells me. So for the band’s self-titled 1999 album, “everybody was writing. Because they knew that the way to sustain a life in music is through publishing.” 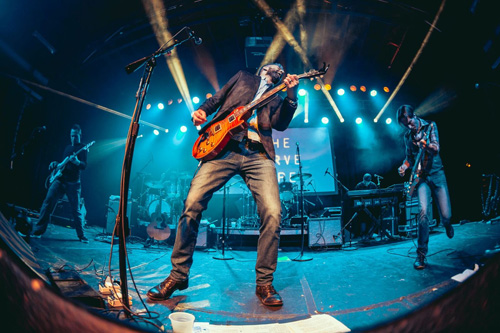 The problem with that approach is that not everybody in a group is necessarily a very good songwriter. Vander Ark explains that in a band democracy, “you have to vote and decide which songs are worthy of being on a record. I don’t care who you are; you’re going to have hurt feelings.”

Moreover, encouraged by the runaway success of Villains, the band let other matters get out of hand. “We recorded The Verve Pipe in New York City; we had a three-month budget for $400,000,” Vander Ark says. Pausing for effect, he continues. “We took nine months and spent $1.2 million.” Riding on Villains‘ success, the group expected big sales for its follow-up.

That didn’t happen. Vander Ark says that he figured “at least 10% of the people who bought Villains would buy the next record, right?” He remembers thinking, “If 150,000 people buy the record, then it pays for itself, and we can make another record.” The Verve Pipe tanked, selling only about 30,000 copies.

While the group would get to make one more album for RCA – 2001’s vastly superior Underneath, produced by Fountains of Wayne‘s Adam Schlesinger – the rot had set in. The Verve Pipe fractured not long thereafter. It would be seven years before Vander Ark’s band made another album; by that time, only he and drummer Donny Brown remained from the original lineup. And the band had taken a very different direction: both A Family Album and 2013’s Are We There Yet? are children’s records.

But in 2014 The Verve Pipe rallied back with Overboard, their first rock album in nearly a decade and a half. With yet another new lineup (Brown had left by this time) the group’s seventh studio album was a return to the catchy songwriting and playing of the group’s heyday.

More recently, the band has been releasing new music directly to fans. “We release about a single a month on our YouTube and Facebook pages,” Vander Ark says. Eventually they’ll compile the best of those tunes onto a new Verve Pipe album. “We figure that’s the way to best do it,” says Vander Ark. “We can’t really afford to block out three months of studio time. But here and there, we can make some gig money and merchandise money, and go into the studio and record a song at a time. Plus it’s good engagement, back and forth with people.”

Of course the band’s live dates are another way it connects with fans. And Vander Ark has a special relationship with Pittsburgh. “I do [solo] house concerts in the summertime, and I probably do three or four in Pittsburgh.” He believes that Pittsburgh concertgoers “like a good story in their song.”

Vander Ark has a favorite Pittsburgh story, one from back in the band’s major-label days. “During The Verve Pipe tour, I had a throat problem. My manager, for some reason, set me up with a doctor who had treated Billy Joel.” The physician came backstage before the band’s Pittsburgh show. “He looked at my throat and he asked me, ‘Do you smoke?’ I said, ‘Yes, I smoke about a pack a day.’ Then he asked, ‘How much do you drink?’ I said, ‘I drink four or five shots of whiskey before and then after the show.’” At that point Vander Ark was prepared to quit all of that to save his voice. “And he looked at me and said, ‘Aw, you’re fine.’ And I thought, ‘Ah! Then I might just step it up!’ He gave me a clean bill on my throat!” Laughing, Vander Ark adds, “That is absolutely a true story.”

The Verve Pipe’s current shows should please fans who enjoy the band’s older material. “The majority of our live set is still Villains and Underneath, but we’ll throw in a few new ones, just for the heck of it,” Vander Ark says with a chuckle. “Those are really for us; otherwise, we would go a little crazy.”

An edited version of this feature appeared previously in Pittsburgh City Paper. If you enjoyed this feature, you may also enjoy this bonus excerpt from my interview with Brian Vander Ark. — bk