Twin brothers Kyle and Eric Travers have been making music together since they were young. In 2012 the Black Mountain, NC residents put together a seven-piece band, Travers Brothership, initially as a vehicle for the original songs they were writing. After some reorganization and re-thinking of their direction, the band finally recorded and released their first full-length album, A Way to Survive, in August. The band – named by Mountain Xpress readers in 2016 as #1 Alternative Band in WNC – scheduled a hometown date, November 26, to celebrate the album’s release.

A Way to Survive opens with “Hold My Name,” a strong tune that straddles the classic southern soul of Stax Records and Muscle Shoals Studio with the modern style of the Black Keys. “Soul music has an organic touch that people can often relate to,” says Kyle Travers. “You can feel the vibes the musicians are putting out.” Tasked with explaining how he came to appreciate soul, Travers searches at length for the right words, eventually offering this: “Everyone experiences love; everyone experiences heartbreak at one point or another. You can almost feel that yearning in the music. And that’s soul; they definitely named it properly.” 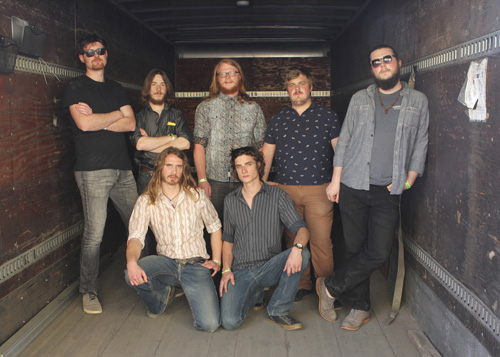 Kyle and brother Eric were immersed in music from an early age; their father is “Hurricane Bob” Travers, a guitarist who became well known regionally for his work with the Magdaddy’s (sic). “I remember being 5 years old,” Kyle recalls. “He was playing in that swing band. Watching his energetic performance and seeing how people responded – they danced and smiled and laughed – really connected with me.” He credits those experiences with leading him eventually to become a musician. “And that was even before I even fell in love with the music,” Kyle adds.

Travers Brothership’s new album displays an array of styles. There are Appalachian Americana-flavored stomps (“The Road Interlude”), funkier, jam-leaning numbers like “Time Will Slip Away,” brief a cappella tunes like “O’ Magnolia” and kinetic rockers like “Like it Or Not.” The last-named song features energetic electric piano and organ supporting soulful vocals and robust horn section work. The group cut the collection of ten varied tunes at Matt Williams‘ Eagle Room in Weaverville, North Carolina. But that wasn’t Travers Brothership’s first experience in the recording studio.

A February 2014 Asheville Citizen-Times feature covered the band’s plans to record an album with Grammy-winning producer Juan “Pericles” Covaz at the studio on the campus of Full Sail University in Winter Park, Florida. But the material they recorded there remain unreleased. Travers isn’t enthusiastic to discuss that chapter in the band’s history, instead summing it up in as few words as possible. Characterizing that period as a time during which the band “started evolving,” he explains that he and Eric “held back and waited patiently while lineup [changes] took their course.”

Travers Brothership also decided that making the album they really wanted would require additional resources. “We decided we wanted to raise more money,” Travers explains, “so we could make a recording that sounds like it’s on a professional level.” After a stopgap release – a 2015 EP called I Don’t Mind – the group organized a crowd funding campaign. With that successfully concluded, the new lineup of Travers Brothership connected with Williams and scheduled studio time to cut A Way to Survive.

The new album – like the EP before it – was released independently. Travers Brothership isn’t on a record label, and is self-managed. Kyle Travers sums up the reason for those decisions in two words: “creative freedom.” He explains that several years ago, the the band attracted the interest of music industry executives at a Nashville showcase. But that interest wasn’t mutual. The label representatives’ plan would be to record an album on which all the songs would stay under the three-minute mark. “We didn’t go for it,” says Travers.

He believes that one of the distinctive qualities of A Way to Survive is the way it presents “seven different genres on one album,” yet still “sounds like one flowing piece.” Holding onto their autonomy, working on their own terms and waiting until the band settled into a stable lineup, Travers Brothership made the album they wanted to make with A Way to Survive.