Steven Wilson came to fame via Porcupine Tree – one of his many group projects – and his name has become synonymous with current-day progressive rock. In addition to a highly successful solo career – 2015’s Hand. Cannot. Erase. is his fourth and arguably best album – Wilson has made a name for himself through his work remixing classic rock albums. He has applied his skills to key works from the catalogs of King Crimson, Jethro Tull, Yes, Gentle Giant, ELP, Caravan and others. As a product of his multifaceted career, Wilson has built a fan base that extends across multiple generations of music fans: younger listeners explore his current work and deep back catalog, while older listeners enjoy the fruits of his labors as applied to The Yes Album, or King Crimson’s influential Red.

“To be honest,” Wilson says, “I’ve kind of stopped doing that.” And he has a carefully reasoned explanation. “There was a point at which I could have easily spent my whole life doing remixes of classic albums,” he laughs. “I’m very grateful for the fact that there was no shortage of offers coming in, but the priority for me has to be my own music.” 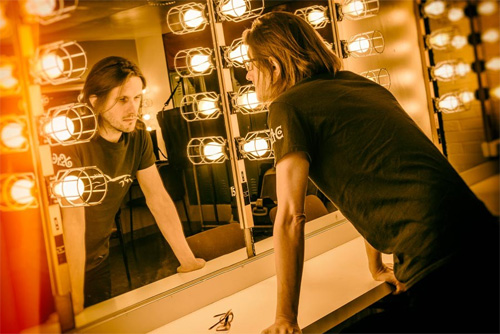 He allows that some of the titles he’s remixed haven’t been reissued yet, mentioning albums from Chicago and acts associated with the 1980s: XTC and Tears for Fears. “The Tears for Fears ones are beautifully recorded albums,” he says, “so the reason to do those is to create the Surround-sound element of the reissues. But there have been albums I’ve remixed that I’ve felt I could perhaps fix things that were perhaps slightly compromised in the original mixes.”

The most well-known album in that latter category is XTC’s 1986 album Skylarking. That record was originally produced by Todd Rundgren, an artist/producer whose body of work is – like Wilson’s own – unique, varied and vast. But XTC leader Andy Partridge was famously dissatisfied with Todd’s work on that LP, and was happy for Wilson to take a crack – 30 years later – at getting it “right.”

Wilson does his best to remain diplomatic about any problems associated with the original Skylarking. “Apparently there were problems with tape recorders that weren’t set up correctly,” he says. “So it’s nice to be able to fix those things, I guess.”

He’s acutely aware that not everyone appreciates the revisionism inherent in remix projects. “There are always some fans who will disagree,” he readily acknowledges. “They don’t like me to mess with what they grew up with.” But he cites Jethro Tull’s Aqualung as a title that was ripe for his remix treatment, to bring out elements that were already in the recording, but that perhaps weren’t audible. Giving credit to advances in audio technology, Wilson suggests that his remix work has often been “as much restoration as it was remixing.”

Wilson learned a lot about making music through digging into those vintage master tapes, but he came to the projects having already made more than 20 albums of his own music, with Porcupine Tree, No-Man, Bass Communion, Storm Corrosion, Blackfield, and the inimitably-named IEM (Incredible Expanding Mindfuck). And while he still has his hand in a myriad of projects, his primary focus these days really is his solo career.

Wilson is currently touring with a stellar group of musicians including Dave Kilminster (guitar), bassist Nick Beggs, keyboardist Adam Holtzman and drummer Craig Blundell. For an artist who always seems to know – and get – exactly what he wants from his music, he’s happy to give his musicians as much leeway as possible. “The solos – and there are a lot of solos in my music – are largely improvised every night by the musicians,” he says. “There would be no point to me hiring these extraordinary musicians if I didn’t allow them the opportunity to express their own musical personalities and identities within the music.” One could argue that he does the same thing – tastefully so – with his album remixes.