Devils in Dust: The Hazards of Hi-Fi

After years of local and regional success with groups of their own, Corey Bullman and Leigh Glass have now combined their musical projects into a single one, Devils in Dust. Along the way, they also fell in love and got married.

When faced with the chicken-or-egg question – which came first: the musical relationship or the personal one? – Bullman is unequivocal. “It was definitely musical first. A lot of people thought it was the other way around, but it really wasn’t.” He had a successful band of his own, Fifth House, and was working on a solo album. “I met Leigh because I was subbing in her band. The Hazards needed a guitar player, so I came in, did the gig. I really liked the music, and her, and so I said, ‘Any time you need me, just call.’” As time went on, he got the call more and more often, and eventually Bullman was asked to join the band. “We both had other relationships at that time,” he says,. “But we had an extreme musical connection from the get-go. 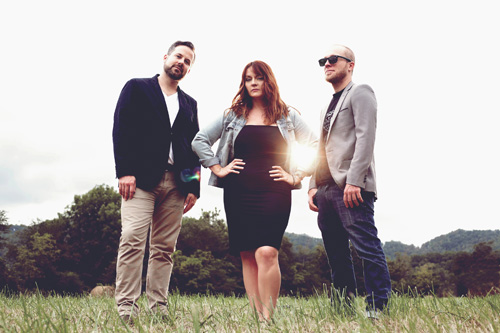 Glass’ longtime band the Hazards was playing regularly, turning out distinctive originals in a Southern rock style. Meanwhile, on his own, Bullman was nearing completion on a project he called Hi-Fi Revival. That still-unreleased album features Todd Smallie (bassist from JJ Grey & Mofro), keyboardist Nigel Hall (Lettuce, the Nth Power), Jacob Rodriguez, Kellin Watson, Justin Ray and others. “It’s a beast of an album,” says Glass. But when Leigh and Corey decided to embark on a collaborative musical endeavor, they opted to start fresh: both the Hazards and Bullman’s unreleased project would be shelved. Their new band, Devils in Dust, would take its name from a similarly (but not identically) titled Bruce Springsteen song.

“The Hazards were a straight-up expression of Leigh,” Bullman says. “Even the quieter moments were kind of … aggressive.”

“And that’s weird,” says Glass with a wink, “because I’m really not like that!”

Bullman’s Hi-Fi Revival was very much reflective of his own individual musical ideas. But with Devils in Dust, both he and Glass have sought to grow and explore the areas in which their individual musical sensibilities overlap and intersect. The result leans much more in a country and western direction than either has pursued in the past.

Glass and Bullman each brings a distinct writing style to their new band. “I’m all about a musical picture,” Glass says. “And then I have to put words to it.” And left completely to her own devices, Glass believes she can sometimes be too wordy. “I should have been a folk singer,” she laughs. “Corey condenses,” she says. In his own songwriting, Bullman asks himself, “’What’s the essence of this idea?’ I strive to get down to the truth of the song.”

With Devils in Dust, Glass and Bullman seek to combine those approaches. “The big difference,” Glass says, “is that we’re writing together. I had almost always written by myself.” Bullman agrees. “I had never found a writing partner who worked well,” he says.

It can be difficult to write with other people, Glass admits. But in working with Bullman, “we never found it to be much of a challenge.” Sometimes either Leigh or Corey will bring in a kernel of a musical idea, and they’ll build on that together. Other times, they start from scratch, collaborating from the ground up. And sometimes songs come when they’re not even trying. “Corey was screwing around on a guitar one day, “recalls Glass. “And he played this killer guitar line. I said, ‘Dude! That’s a song! Write that down now!’”

A week later, they sat down to make a song out of the bits they had. “We asked ourselves, ‘What is this song about?” says Glass. “And because of the guitar line, we knew it was a heartbreak song. Eventually it became “Rosalee,” one of the seven tracks on Devils In Dust’s self-titled debut album.

Recording sessions for Devils in Dust took place at Asheville’s Echo Mountain Studio and – at the urging of songwriter Spooner Oldham, a fan of Devils in Dust’s music – in the legendary studios of Muscle Shoals, Alabama. In addition to some session players – most notably the Honeycutters‘ Matthew Smith on pedal steel guitar – the album features the band’s drummer, Jacob Baumann, rounding out the trio.

Bullman characterizes the music on Devils in Dust as “an exploration of some other sides [of us] that we finally have an avenue for.” With Devils in Dust, both he and Glass leave behind any perceived baggage of their previous music. “There’s no association of it having to be a certain way,” Bullman says. “It can be softer, quieter. We can be understated, and it’s not a bad thing.”

As far as the future, Glass admits, “I don’t have any idea where we’re going to be musically. So with Devils in Dust, we decided we might as well do some awesome shit while we can.”