For several years now, Celtic fiddler Jamie Laval has crafted a special December program for audiences. Bringing together music, dance and storytelling, Laval presents “Celtic Christmas,” a family-friendly performance that showcases not only Christmas traditions, but observances of older pagan rituals centered around winter solstice. Laval’s late December performance calendar included a show in Asheville NC on December 29, and another in nearby Tryon on December 30.

Jamie Laval won the U.S. National Scottish Fiddle Championship in 2002; that same year he performed for Queen Elizabeth II and presented a TED Talk, “How a Fiddle Tune Can Change the World.” Murmurs and Drones – his third album, released in 2012, won the popular vote in the “Best World Traditional Album at that year’s Independent Music Awards. 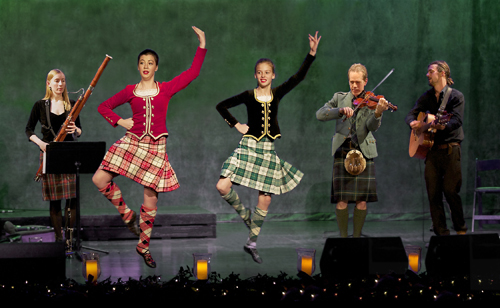 Each year Laval builds his winter program around a theme – for 2016 it’s “Music and Stories for the Deep Midwinter” – and every program balances music, dance and storytelling. Laval promises “some really early, almost prehistory legends from the far-out reaches of the British Isles; they have that dark, midwinter atmosphere.”

Laval makes sure that every year’s show is different than those he’s done before. Describing the 2016 shows as “the culmination of several years of labor of love,” he says that the cast for Celtic Christmas is the largest he’s ever assembled. Asheville’s Rosalind Buda is featured on bassoon, bagpipes, and bombarde (a double-reed instrument closely associated with the Breton peninsula in France). “She’s a sublime poetry reader as well,” says Laval. “Rosalind doesn’t just [recite] the words and the rhymes; she brings a Druidic element” into the poems.

Celtic Christmas musicians also include Laval on violin, harp, bagpipes and storytelling, plus Haley Hewitt on Celtic harp. Boston-based Hewitt is a graduate of the Royal Conservatoire of Scotland. The instrumental quartet is rounded out by 17-year-old classically-trained soprano vocalist Claire Griffin; Griffin made her professional debut at the Flat Rock Playhouse in 2015’s Chasing Rainbows: The Road to Oz.

And unlike Scottish dance with its colorful tartans, Breton dancers wear “traditional garb, sort of black-and-white, really puritanical type of outfits,” Laval laughs. “I’m kind of on a Breton kick right now; I just visited Brittany this summer, and I thought that would be a really nice thing to feature.”

There’s a close relationship between Celtic traditions and Appalachian old-time music, one that helps explain the former’s popularity in America. The music’s “modality and tonality are a direct lineage,” Laval says. “So if a person is exposed to old time Appalachian music, they’re automatically going to find in the Celtic music a familiar sound, one that resonates with them.” And on a wider level, the popularity of national touring companies like Celtic Woman, Riverdance and Lord of the Dance have all done much to increase the profile and popularity of Celtic music, dance and storytelling traditions.

“When people aren’t ever exposed to something, it seems foreign,” Laval continues. “And then they’re not as apt to respond to it immediately. So exposure is essential.” He says that as more and more people become familiar with roots music in general, so will the appeal of – and interest in – Celtic traditions grow. “There are some superstars touring now who have brought Celtic music and old time music into the more public eye,” he says, mentioning Asheville-based Rising Appalachia as one of his favorites. “They’re just tearing it up,” Laval says. “They’re bringing this type of music to a whole new wider audience.”

Laval believes he also understands why Celtic music and stories have become closely associated with the Christmas season. “I think it’s in response to a lot of people’s frustration about the over-commercialization of modern holiday time.” Reacting to the product-orientation of the season and the associated glitz, people find Celtic traditions “an antidote to that; they enjoy a more traditional atmosphere, one harking back to days of old.”

That valuing of traditions also explains the enduring popularity of sledding, caroling, baking and the exchanging of Christmas cards, Laval believes. Reaching all the way back to pre-Christian traditions in France and the British Isles, “the early Celtic holidays are very rooted in nature and very simple lifestyle,” Laval says. He notes the popularity of “certain pagan ideas about being in touch with the forest, the seasons, with movement of the sun and moon. I think these are simple values that people enjoy getting back to for a little while during the holidays.”