Home  »  interview   »   Paul Vo: The Inventor and His Thousand Elves

Paul Vo: The Inventor and His Thousand Elves

“If you tap on something and you get a tone, there’s music hidden in there. And I have the technology that could bring it out.” So says Paul Vo, an Asheville-based inventor who applies technology to expand the range of traditional, acoustic instruments.

Vo’s latest invention is the Vo-96, a low-profile device that attaches to the body of an acoustic guitar. Put very simply, the Vo-96 harnesses the power of magnetic fields, channeling them to interact with guitar strings. As Vo explains, “out come sounds that have never been possible” in a stretched-string instrument. 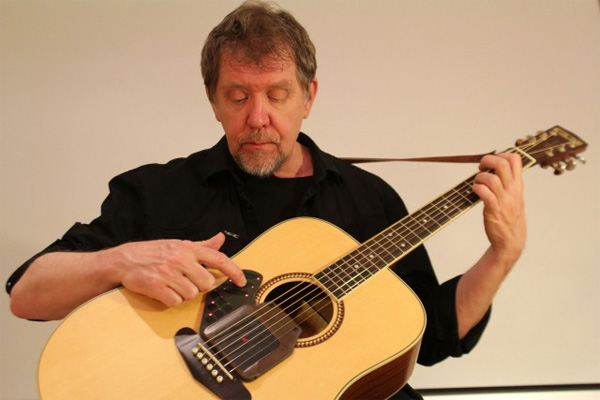 The soft-spoken inventor elaborates on his technology. “With precise magnetic fields, you can – so to speak – unleash a thousand little elves with tiny hammers that can compel the string to do different things.”

Vo fully understands that these concepts are often difficult to explain. “When you do something that’s not in the mainstream, when you try to do something that hasn’t been done before, you run into the problem of people not even understanding what it is.”

He notes that funding can also be an issue. But in Vo’s case, it hasn’t been. Based on his reputation for innovation – the Moog Guitar was the first implementation of his technology – the Vo-96 Kickstarter campaign yielded “220% of what we asked for,” Vo says. To date he has built and shipped nearly 100 units.

Vo’s entire life could be characterized as one big learning experience. “Electronics was my family hobby,” he says. “My granddad got hold of me as soon as I could think a little bit.” Each issue of Popular Electronics had a do-it-yourself project; 10-year-old Paul’s job was to convey those ideas to his grandfather, who spoke only Russian.

Bored with conventional education, Vo dropped out of school at age 16, never to return. “Everything I learned with my granddad and my father, I was unaware that I was even learning. It was just a joyful, fun thing.” First working as a TV repairman, Vo would go on to become Engineering Manager for Yorkville Sound in Canada, then Director of R&D for QSC Audio Products in California before striking out on his own.

With the success of the Vo-96 and other devices, Vo is already working on his next innovation. “I have dreams of doing much more with other instruments,” he says, “and even bringing to musical life materials which heretofore have not been instruments.”

An edited version of this story appeared previously in WNC Magazine.