Spontaneity is a highly valued commodity in the jazz world. And Jonathan Scales has that quality in great supply. He brought that just-in-time approach to competing in a national search for musicians to serve as cultural ambassadors for an international concert tour in 2017. And in December, he toured with a collective of esteemed musicians who held their first rehearsal only days before their first gig.

The tuned-percussion steel drum or pan drum is relatively uncommon in jazz and/or fusion. But it’s Scales’ chosen means of musical expression. And even his selection of the instrument had an air of spontaneity; he had never played the steel drum before enrolling in the music program at Appalachian State University. “I had some drum line background, and I played saxophone in my high school band,” he says. “I was there to be a composer. I didn’t want to play steel drums at first; I was apprehensive. My friends talked me into it the week before my freshman year.” 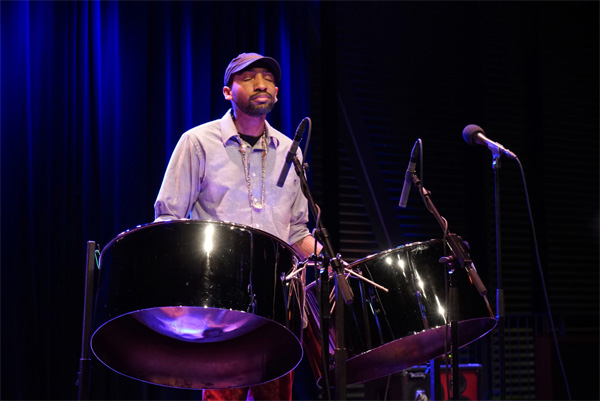 As he immersed himself in mastering the steel drum, Scales learned about the instrument’s place in jazz. He cites players such as Len “Boogsie” Sharp, Andy Narell and Othello Molineaux (the latter of whom played with jazz great Jaco Pastorius) as major names who helped popularize the steel drum. But Scales fails to mention that the Wikipedia entry for the instrument mentions his name right alongside those players.

Scales released his debut album, One Track Mind, in 2007; four others have followed, including two with his longtime band, the Jonathan Scales Fourchestra. His success at incorporating steel drum as a lead instrument into jazz fusion won him accolades, and prepared him for his upcoming role as a cultural ambassador for the United States. Scales first learned about the State Department program three years ago. “My booking agent at the time told me about it, saying, ‘Hey, this might be something cool you might want to try.’” He went through the lengthy application process, but wasn’t selected. He tried again the next year, and still wasn’t chosen as a semifinalist.

In January 2016, he tried a third time, and succeeded. Out of the 300 applicants, about 45 were chosen; those musicians would each give a 15-minute audition in New York City. Auditions consist of an original song, an arrangement of a folk song (chosen ahead of time by the judges), a music business lecture and a sample music lesson. So with plenty of notice, Scales put his program together well ahead of time, right?

“The day before the audition, we were on tour in Michigan,” Scales recalls. When he awoke that morning, he wrote out his arrangement of the Lebanese folk tune. Then he headed to the school where he was scheduled to perform. “I taught it to [the band] before the kids came in: ‘We’re playing this tomorrow, so make sure you guys remember it.’ Then we flew to New York.”

But at least he had memorized the talks he’d have to give in front of the judges. Right?

“We got to the hotel about 10 o’clock the night before the audition,” says Scales. “I worked on the two lectures, and quietly practiced the Lebanese folk tune.” The audition went well, and Scales was confident he had made the cut. Indeed he had, and in February he embarks on a 30-day tour of China, Taiwan, Hong Kong and Indonesia.

But in December Scales was focused on his U.S. tour. After leading the Fourchestra with a fairly stable lineup for several years, his new approach – still under the Fourchestra name – is to team up with like-minded (and high caliber) musicians based on their availability and suitability for a specific project. The tour featured drummer Robert “Sput” Searight from Snarky Puppy, former Prince bassist Dwayne “MonoNeon” Thomas Jr., and renowned African percussionist Weedie Braimah, formerly of the Nth Power.

But even this collaboration displays Scales’ spontaneous nature. “I show up, say ‘Hey, how’s it going?’ And then we’re off,” he laughs.