A Look Back at ELP with Carl Palmer, Part Two

Bill Kopp: The term “supergroup” was just coming into use around the time ELP got started. And it certainly applied to you three, since each of you had achieved success in previous projects. I would imagine there were expectations placed upon you by the music press and so forth. Did that reality intimidate you at all, or did it encourage you in a way?

Carl Palmer: Well, to be honest with you, Keith [Emerson] and I were mentioned in a supergroup in 1968 by Chris Welch. He used to write for Melody Maker magazine. He put four [imaginary] supergroups together. It was Keith, myself, Stevie Winwood, and … who else was it? Someone else; lead guitar player or bass player – I can’t remember. And then there was another group, and another. So this supergroup kind of branding, which is really a journalistic sort of phrase, came very early, came way before ELP.

ELP really wasn’t happening until two years later, almost, 1970. So, I was kind of used to having that branding; there was no problem there. I think where it got out of hand was when journalists started to write that [Jimi] Hendrix was going to join ELP, which was not true, because I never saw Hendrix at any time in any of the periods that I personally played in ELP. He was not there at the beginning; he was not there at all. So this was just something made up by the journalists because they could call the band “HELP.” 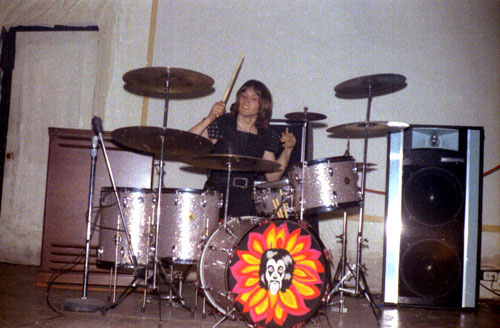 A pre-ELP Carl Palmer, with the Crazy World of Arthur Brown

Chris Welch dreamed it up. You have to realize that at the time he was an extremely well-thought-of writer in the music industry here in Europe, at the time especially in England. He just put those groups together [in his mind].

The ironic thing was that I had actually played with Steve Winwood when I was 12 years old. I hadn’t seen him since, and suddenly 10 years down the line or whatever it was, there I am, in the paper in a supergroup with him. And with Keith Emerson who I went on to play with 2 years later. So some of the bands actually came true! I can’t remember the other groups; I’ve got a clipping here somewhere…

But, yes, it was something that was basically generated by this one guy who really loved music. He knew all of these people and he thought that this was the combination that would work.

We went along with this for a long time, but basically it was all complete rubbish, you know. Nothing ever happened with Hendrix, even though I think Keith might have played with him one night in some club in Central London. But there was never any talk amongst the three of us about Hendrix joining.

BK: Speaking of labels … to your mind, was ELP a progressive rock group, a pop group, a power trio, or something else? You trafficked in a lot of styles.

CP: Keith was by far the better writer than any of us as far as directional concepts, that type of writing. If you wanted two or three chords for the folk song, something really simple, Greg [Lake] definitely had the upper hand on Keith and myself. So we were very lucky to have two very strong writers in the band going in different directions and being able to put it together.

You have to understand one thing here – and I wish to make this quite clear – they always call Emerson Lake & Palmer a prog rock group. I’m still playing Emerson Lake & Palmer music today with my group, Carl Palmer’s ELP Legacy. I’m still playing this music and it’s given me a great, great thrill. But if you go back to the original group, we had more hits with folk songs: “C’est la Vie,” “From the Beginning,” “Still … You Turn Me On,” “Lucky Man,” “Footprints in the Snow.” These are all big hits.

Until we had a hit on a commercial front with a simple kind of folk song, the first one being “Lucky Man,” we wouldn’t get people to go into the album and go three or four tracks deep and listen to the actual complexity and the diversity and the eclectics of flavor the group had. Because we were European, we weren’t American, we were keyboard driven, we didn’t play blues, we didn’t really play out-and-out rock and roll, even. We played a European, sort-of rock music with classical adaptations and a few original folk songs thrown into the mix.

BK: That makes a lot of sense. In one sense, you were very much a pop group if you look at it from the standpoint of the singles.

Yes, and we were very much a prog group as well, because we had all of the latest technology; we really pushed the Moog synthesizer to the front. One of the all-time great Moog solos on a pop tune – which became one of the iconic prog rock solos – is “Lucky Man,” the solo at the end. So we crossed a lot of bridges all at the same time. 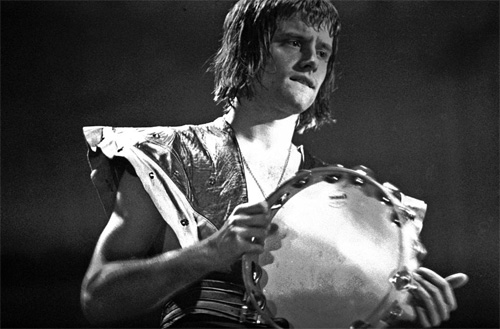 Carl Palmer with ELP in Germany. 1973

They used to call us a prog group, but it was really only half the story. And then you had all the technical expertise: everyone was a really great player, almost a master of his trade, so we had a lot going. [Greg Lake’s voice] wasn’t a blues or rock voice. It was an English choirboy-sounding voice. We went against the grain all the way. I didn’t play like an out-and-out rock drummer, because I had quite a lot of classical training. So I could bring in the tuned percussion – vibraphone, glockenspiel, bells, tympani, whatever – in, and we had a bigger sound as three people.

There was a lot going on in those days. It was very different, and we were very, very surprised that it took off in America, but it did. In hindsight when you look back on it, you can see why: because it was totally different to anything else that was happening.

BK: The name of the band – equal billing for the three of you – suggests a kind of democracy. In practice, did it feel like an equal partnership?

BK: From a commercial standpoint, was your collective point of view – assuming there was a consensus – a goal of creating each album as a free-standing creative expression?

We just tried to do the best we could every time. What came out, came out. When it went wrong, it went horribly wrong, like Love Beach in ’78. When it was right, you had something like Brain Salad Surgery. When it was absolutely laying the blueprint down for prog rock, you had Tarkus. The very first album, which had the drum solo on it, has “Lucky Man.” It has a classical variation, “The Barbarian,” by of Béla Bartók; not even written by the band. Then on the B-side of the vinyl – ’cause it was vinyl in those days – there’s three pieces of music: “The Three Fates,” with Keith playing a church organ on his own. I mean, what kind of band is that? That shows you how eclectic it was from the get-go. We just didn’t care; we did what we wanted at the time, and it worked. And we’re very lucky. As we went on, we did get more progressive; we did evolve with technology.