My Holiday Gift to You: The Verve Pipe

For those of you who observe and/or celebrate the holiday, Merry Christmas! Here’s my gift to you.

Oftentimes when I do an interview, worthwhile content doesn’t find its way into the finished story. Space considerations often dictate that; other times, we go off on a tangent that – while very interesting – doesn’t fit neatly into the subject matter of the story.

Whenever I can, I write multiple stories (for multiple papers or magazines) based on a single interview. But sometimes opportunities to do that are limited or unavailable.

With that explainer out of the way, here’s an excerpt from my recent conversation with Brian Vander Ark of The Verve Pipe. You may recall their ’90s hit “The Freshmen.” You may also recall that some people confused the Michigan band with Richard Ashcroft‘s similarly-name band The Verve.

Yeah, well Vander Ark has some thoughts on that … this is too good not to share. 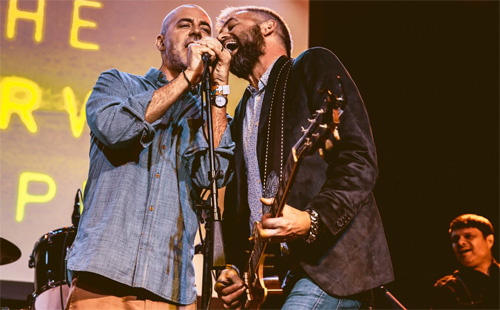 BRIAN VANDER ARK: We get way too many requests for “Bittersweet Symphony.” In fact I would say it happens once every three shows. Somebody will come up afterwards and say, “Why didn’t you play “Bittersweet Symphony”? The worst was … we just played in Arlington, Texas and this little girl who was probably four years old made a big beautiful sign that said “Play ‘Bittersweet Symphony!’” It was like, “Aww … do I want to strangle your parents right now.”

BVA: It happens all the time. And we’ve played around with it at kid shows, too, you know. We poke a lot fun at ourselves; all of our stories are about shenanigans when we grew up Every now and then we’ll play the keyboard riff just to be funny.

I’m sure we have a better sense of humor about it than Richard Ashcroft has! When our songs were [on the charts] within months of each other, I’m sure that [The Verve] got the worst of it. We weren’t the “cool” band, and our teeny-bopper fans were on their message boards all the time screaming about how much they loved it. And I can’t imagine … his head would explode if somebody requested “The Freshman” at a Verve show. Oh my God! I would like to be there for that.

BK: The upside is that you never got in trouble with The Rolling Stones‘ lawyers for taking stuff off of a recording and using it in your song.

BVA: They had a lot of bad luck, that band, because of the name, with Verve Records.

We had just named [our] band in 1992 and I saw in … it might have been two music magazines from over in England … this advertisement for A Storm in Heaven by The Verve, so we thought, “Oh my God, there’s already a band called Verve!” And then we were like, “Well, we’ve got to change it.” And then we thought, “Well, what are the chances that they might get big and we might get big?” Really, literally, it was in March. It was crazy.

So once they got sued and had to add the “The” to their name, we thought, “Well, we’re pretty safe. We’ve already got “The” in there.” The fact that we weren’t sampling or doing anything like that we felt pretty confident that we were ok. We considered changing the name right up to the release of Villains, but decided against it.

My Verve Pipe feature-proper will be on Musoscribe in January. — bk