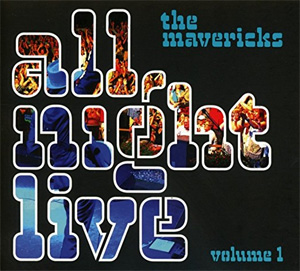 Fans who heard “All Night Long,” the standout track from the Mavericks’ latest studio album (2015’s Mono) could be forgiven for wondering if the group could pull the song off live onstage. Full of bracing horn section fills and Latin-flavored percussion, the tune is a production extravaganza. The Mavericks, meanwhile, are nominally a four-piece. But as All Night Live amply illustrates, the group – aided and abetted onstage by “the Fantastic Four” (trumpet, sax and many other instruments) tears through “All Night Long” and other favorites from the group’s back catalog. The set’s focus is weighted toward songs from the band’s most recent incarnation (2013-present). A sonic document of the excitement of a live Mavericks concert, All Night Live is the first release on the the group’s own label, and, yes, the “Volume 1” title gives a pretty good hint as to the band’s future plans.