During my conversation with Rick Wakeman, the subject inevitably turned to equipment. As a keyboard player myself, I was thrilled at the opportunity to discuss gear with one of the great keyboard players. Today I present that portion of our chat. – BK 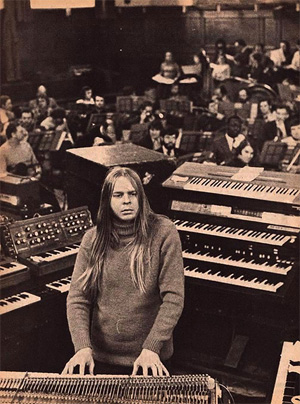 Bill Kopp: Right as you came to prominence, keyboard technology was really exploding. No more were keyboardists limited to piano and organ. And you, of course, very quickly developed a reputation for intelligent use of the new technologies, whether it was Mellotrons, Moogs or whatever. As you discovered new keyboards or got your hands on new keyboards, did you find that each of them inspired you in some new direction just by virtue of the potential within each one?

Rick Wakeman: I consider myself to have been … I was extremely lucky. This might sound a bit weird. You now have keyboards that have got thousands and thousands and thousands of potential sounds; there’s nothing you can’t do, really, now. But back in the early days, it really was that you got a hold of a keyboard … I mean, I’ve discussed it with my great friend, the late Keith Emerson: we’d get a hold of a new Moog or something, whatever it was, and you would just sit for hours in the hotel room trying to make it make a noise. And then once you made a noise you nurtured that noise and that became your … that’s what you did. And there was sort of a frustration – although we didn’t realize it – in that it was a wonderful period, if you think about it, up until about the late ‘70s, almost, when the musician – especially the keyboard musician – was ahead of technology. He wanted to do things that technically couldn’t be done. We dreamed, like so many, of creating good sounds. We dreamed of all these kind of things. And we had to try and find ways of doing it, which sometimes took hours – if not days – to come close to do.

And then technology slowly caught up with us, and then raced ahead of us at a rate of knots. But I think, I think – I always had this discussion with the late Jon Lord as well; we were very close friends – that the great thing was none of us would have traded that period of time that we grew up in. Because we were able to work with a lot of the keyboard companies and pioneer a lot of the things that happened. We were allowed to be individualistic because you had no choice! Because the instruments of the time weren’t individualistic. You had to make the sounds to make them that. And that really….we look back…we sort of say, “Hold on a minute. This is something really quite special.” 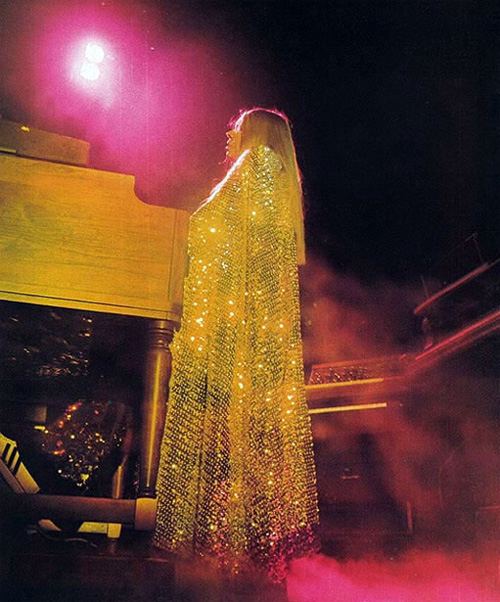 BK: I remember in all the films that I’ve seen of back in the ‘70s, you used to have at least two Minimoog Model Ds. Because obviously you do not want to sit there twisting knobs and stuff while the rest of the band is standing there going, “You ready yet? Are you ready yet?”

RW: [Laughs] Yeah. I still use a couple. I’ve still got a couple that I use, because they are unique. Because of the nature of how the instrument is put together, there isn’t a way of accurately sampling them. Because these are constantly playing even when you’re not. You’re pressing a note. So when you do, you press it, it can be anywhere within a certain cycle of what you set. You can’t do that on any other way but on that instrument. And there’s just something fantastic about them. I mean I love them to bits.

And my rig is a real mixture of stuff going back to the Minimoogs of the early ’70s, and I’ve still got some keyboards that I used from the ’80s, and of course some very new ones as well. When I get back from Trevor [Rabin]’s in the middle of August, I will know exactly what I want to put together for the rig for the tour. And myself and my engineer, we’ll spend probably about three weeks putting a rig together which will do the job that I want it to do. That you couldn’t do back in the ’70s. Every instrument basically produced one sound, so you had load of instruments just to produce that one sound. It was just great fun.

BK: I don’t imagine you use an actual Mellotron anymore, do you? 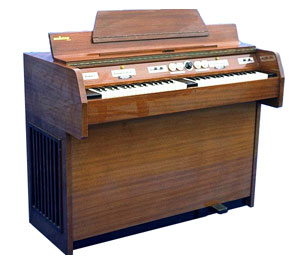 RW: No. Ahh, the dear old Mellotron! They were fantastic, but they were full with problems. And many times I walked on stage and saw miles and miles of tape strewn everywhere, and a very angry looking sort of a keyboard tech guy. “Why can’t you get rid of these bloody things?” There were a few samplers that came out, and none of them were really … they were okay, but they weren’t great.

And then a German company got hold of me and said, “We’ve got a thing called the Memotron.” And I said, “Have you?” This was 2012? And I said, “Have you?” They went, “Yeah.” And then they said, “You’ll like it.” I said, “Go on, then. No one has managed it yet.” It is sensational. It is so good. It does everything that Mellotron did and more. And they’ve even, if you want to use it, incorporated all of the force that the original Mellotron had. It is a stroke of genius. I’ve got two of them and I love them to bits.

BK: Does the sound cut off after eight seconds?

BK: Oh, wow! That’s the big thing! I have a Nord Electro 4, which has a decent sample of it in there, but of course you can hold it down for a week and it keeps playing. And that’s not a Mellotron.

RW: That’s right. See, because one of the things that I’ve always argued – because several people said, “Ahh! Why don’t they get rid of that eight second thing and let it run forever?” – I said, “Because you have to play Mellotron a certain way. You have to keep moving your fingers around to keep sound and things going. And that is what creates the Mellotron as to what it is. So you still have to play as if you were playing a Mellotron. It’s really so clever. I absolutely adore my Memotrons. As I said, I’ve got two, and that is just a great part of the rig.

BK: Has there ever been a so-called “advance” in keyboard technology that you haven’t appreciated? For example, some people didn’t like the Synclavier.

RW: The Synclavier … it’s really interesting. I still get asked, “Oh, try this out, have a look at this, try it out.” And I have always had a Golden Rule for myself: I won’t use anything or take anything from a company or buy anything from a company if I’m not going to use it. I don’t see the point of having a keyboard just because it’s a new keyboard. So it has to sort of suit me.

The best answer I can give you on that, really … probably one of the most asked questions I get at concerts is from young people, young keyboard players saying, “I want to get my first keyboard. What should I get?” And I say, “Listen. You don’t want to get what I suggest, you need to get what you want. What you need to do, you need to go to a music shop where they’ve got lots and lots of different keyboards, and you try them all out. And no matter how long you take, if you’re going to be there for two hours, you try them all. And I guarantee there’ll be one that you’ll go, “Oh I love this! That’s inspiring!” And that is the one you buy. Not the one that anyone tells you to buy.”

And I still do the same thing. The Synclavier, some people love it, some people hate it. It didn’t do anything for me; it was too clinical for me. It didn’t have any heart for me.