Teenage Fanclub is Here and to Stay

Glasgow, Scotland-based Teenage Fanclub is quite popular in Great Britain; 9 of the band’s 11 studio albums have charted there. Here in the US, their albums haven’t sold as well; they have had to be content with uniformly positive critical raves along with a small but fiercely loyal fan base. Those fans have their own reward, too: a new, long-awaited album from the band (Here, released in September) and 11 North American tour dates in October. 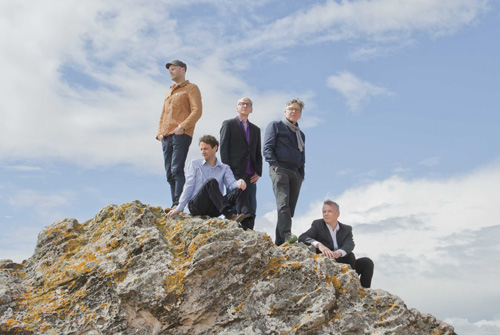 The earliest Teenage Fanclub albums documented the sound of a band searching for its distinctive style. But they found it with 1991’s Bandwagonesque, a mix of soaring, close vocal harmonies and shaggy, distorted guitar lines. For their efforts, the band’s third release was named Album of the Year by Spin, whose editors chose Bandwagonesque over Nirvana‘s Nevermind. Teenage Fanclub’s star never rose as high as that of Nirvana, but they’ve gone on to release a consistently high-quality string of albums.

Even though Teenage Fanclub has three primary songwriters – guitarists Raymond McGinley and Norman Blake, and bassist Gerard Love – their songs always fit together on record into a cohesive whole. “It’s not like each of us sitting down and thinking, ‘Okay, this is a Teenage Fanclub song, so I’m going to make it a certain way,’” says McGinley. “But we know what we’re working toward, what the destination is.” He says that the band’s long-held practice of recording basic track with “all of us playing together at the same time” contributes to a kind of unified sound, no matter whose song is being played.

“When we’re in the studio, we usually haven’t finished writing the songs,” McGinley explains. So the shared environment of the recording studio is where the finishing touches are applied to Teenage Fanclub’s music. He believes that shared experience of “filling in the blanks” often has the effect of giving the signature Teenage Fanclub sound to most of the group’s recordings.

There was a long gap between 2010’s Shadows and Here. But McGinley dismisses any notion that the band members were inactive for a half decade. Sessions for Here actually began in 2013. McGinley points out that during that time he also recorded an album with UK folk-rockers Snowgoose, and notes that Blake and Love were quite busy as well. “Our drummer, Francis MacDonald, manages Camera Obscura and the Vaselines,” he says. “So it doesn’t really feel like we were hanging around,” he laughs.