Mike Mills Bridges the Gap Between Rock and Classical

Most people know Mike Mills as the bassist in R.E.M.; he was a founding member of the band and remained with them until their 2011 breakup. Since that time, he’s been a key player in the series of “Big Star‘s 3rd” concerts. But behind the scenes, Mills has been working on an even more ambitious project: working closely with his lifelong friend, virtuoso violinist Robert McDuffie, he’s created a musical work that bridges rock music with classical orchestration. Concerto For Violin, Rock Band and String Orchestra was released on CD October 14*, and Mills – joined by McDuffie, a rock band and Chicago’s 15-piece Fifth House Ensemble – took to the road to perform the new work in concert halls across the country.

The idea of combining rock and classical themes isn’t new. Producer George Martin devised classical string arrangements for the Beatles‘ “Yesterday” in 1965 and “Eleanor Rigby” in 1966. Brian Wilson’s large ensemble arrangements on the Beach Boys‘ 1966 album Pet Sounds have an orchestral feel to them. And in the early 1970s, Electric Light Orchestra began as an attempt to pick up where the Beatles left off, incorporating cello, violin and orchestra into a rock idiom. 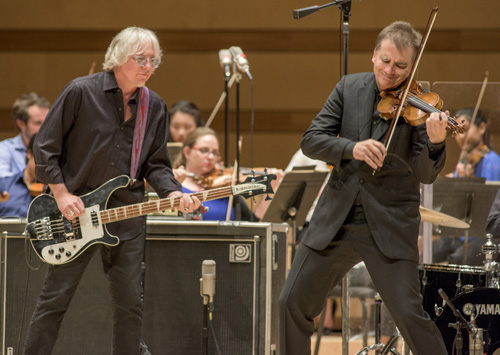 From the opposite direction, minimalist composer Philip Glass has often directed his classically-based work toward a rock audience, and the Kronos Quartet plays in a classical style but with the power and sensibility of a rock band.

Yet what Mills is doing with Concerto For Violin, Rock Band and String Orchestra is subtly different. The work – a roughly-30-minute piece in six movements – is built around melodic pop themes, but presented by a hybrid ensemble that takes the best from both rock and orchestral styles. “I thought of it as five or six separate songs,” explains Mills. “I figured they would hang together, because the instrumentation would be pretty consistent throughout.”

Mills – a primary composer of many of R.E.M.’s most well-known songs – places a high value on melody. “To me it’s the most beautiful part of music, period,” he says. “And it’s something that I’ve always striven for, whether it was R.E.M., or this Concerto, or anything else I’ve ever done.”

The Concerto isn’t Mike Mills’ first foray into orchestration, though he downplays his earlier efforts. “I did a tiny amount of work with some classical instruments with R.E.M.,” he says, “like a string quartet on Feeling Gravitys Pull [released 1985] and the odd cello here and there.” It’s likely, too, that he paid close attention when Led Zeppelin‘s John Paul Jones arranged a string section for “Nightswimming,” a track Mills wrote for R.E.M.’s 1992 album Automatic for the People.

More recently, Mills’ experience helping create live performances of the songs from Big Star’s Third opened his eyes to the power and versatility of classical instruments. Though he says that Carl Marsh‘s string arrangements on Third didn’t influence him “on a conscious level,” Mills allows that “it’s possible that we share sort of the same sensibilities. Authors or composers will, even if they have never heard each other, have often come from a similar beginning.”

In creating the Concerto, Mills combined modern and traditional methods of composition. “I used ProTools to put down ideas,” he says. “For the ‘rough tracks’ I put down guitars and drums, and then wrote melodies over that.” He exchanged files created on a computer synthesizer with arranger David Mallamud, but stresses that writing the Concerto “wasn’t an overly software-type event.”

Live onstage, Mills leads the rock band portion of the ensemble, switching between bass and keyboard, sometimes within a single movement. The Fifth House Ensemble plays the classical motifs, and Robert McDuffie’s violin serves as the lead instrument of the instrumental work. “I thought of Bobby’s violin as the vocalist,” Mills explains. He says that Mallamud encouraged him to “take advantage of Bobby’s virtuosity; he helped me to take my melodies to places that I might not have thought to go. I had never written for violin before, and I didn’t know, exactly, what the violin was capable of, so David certainly helped me to stretch both my imagination and Bobby’s abilities. There are a lot of very difficult passages in this thing, and it was really fun to see those come to light.”

Concerto for Violin, Rock Band and String Orchestra premiered in Toronto in June, where it received an enthusiastic reception. That was followed by performances in Rome, Italy and at the Aspen Music Festival. The studio version was recorded over Labor Day Weekend, and the 14-date North American tour kicked off October 20 in Miami. In addition to Mills’ Concerto, the live program also includes performances of John Adams’ Road Movies and Philip Glass’ 1995 Symphony No. 3. All three works feature McDuffie on violin with the Fifth House Ensemble.

The Concerto is remarkably successful at bridging the gap – or perhaps finding and exploring the commonalities – between classical and rock. And while Mills’ profile will draw R.E.M. fans to his new work, he wants others to listen, too. “It’s very important to me that classical fans like it,” he says. Mills believes that the walls between the two musical forms “are not as tall as people think they are … or as high as they want them to be.”

* An earlier edit of this story asserted that the street date for the CD had been postponed; I’ve been told this is not the case. Instead it appears that demand may have outstripped supply and that additional CDs are being pressed. Still, both Amazon and Target online list a January 20 2017 release date. — bk