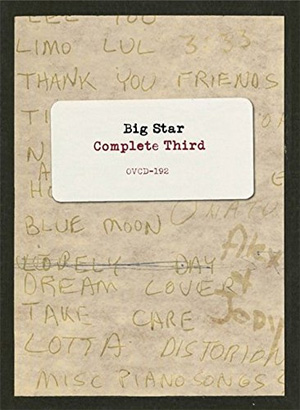 The third album from Big Star is the most difficult in the Memphis group’s slim catalog of 1970s releases, and quite unlike its predecessors. The band’s debut – 1972’s #1 Record – is full of gems in an off-kilter power pop vein. Thanks in no small part to distribution problems at Ardent Records’ parent label Stax Records, it didn’t sell well, but hip and knowing rock critics heaped praise upon the album. Many decades later, a Cheap Trick cover of “In the Street,” one of #1 Record‘s best songs, would be used as the theme song to That ’70s Show.

Those few music consumers who found, bought and loved 1974’s Radio City may have noticed the absence of founding member Chris Bell, but in general they would have found Big Star’s second album a logical and superb follow-up to #1 Record. It, too, contains a song that would gain belated fame: in 1986, the Bangles covered “September Gurls” on their hit album Different Light.

Big Star lost members as it went along: Bell departed during the sessions for Radio City; bassist Andy Hummel left shortly after the second album flopped commercially. By the time sessions commenced for what would be Big Star’s third long player, the group – if one could still call it that – was down to founding members Alex Chilton (guitar, vocals) and drummer Jody Stephens.

Big Star’s Third is sometimes described as the sound of a band – or at least Chilton – falling apart. In that way it superficially resembles the Beatles‘ Let it Be: a collection of songs delivered in a fashion that’s sometimes impassioned, sometimes off-the-cuff, occasionally sloppy, and nearly always permeated with a sense of despair and anguish. Third is in turns baroque in its refinement and slapdash in its execution. And therein lies much of its appeal.

The history and legacy of Third has long been clouded by the fact that no one seemed to know just how to put it together for release. By the time Chilton and Stephens (plus a cast of Memphis session players) completed the record, Ardent and Stax were no longer involved; when the album finally came out in 1978, it was on a tiny British label, Aura. Nobody was clear which songs from the sessions belonged on the album, or in what order. For his part, Chilton would be quoted some years later denying that Third was even intended as a Big Star album.

Against that backdrop, it’s little surprise that Third sold in minimal quantities. But there was a certain something about it; something that – like #1 Record and Radio City – intrigued listeners. Third‘s reputation and influence would significantly outstrip its limited commercial success. Today “Big Star’s Third” tribute concerts draw enthusiastic crowds, and the album enjoys a revered place in the estimation of many critics.

In the years after its original release, Third has seen many reissues. Some used what was thought to be the album’s “real” title, Sister Lovers. Various sets of master tapes were used for the release; the running order varied widely, as did the track selection. Originally 12 songs, Third grew to 17 on reissue. And when Ryko acquired the rights to the album, the company released Third as a 19-track compact disc, the most exhaustive version to date.

In 2011, Omnivore Recordings released what it called the “Test Pressing Edition” of Third, based upon an original Stax acetate. In the absence of any other definitive documentation, this 14-song configuration suggested an “official” running order and song lineup. Pressed in extremely limited quantities, the 2011 vinyl LP is now an expensive collectors’ item.

And after posthumous box sets, live albums, reunions and a documentary, that would have seemed to have been the final word on Big Star. But it wasn’t. In October, Omnivore Recordings released the sprawling and definitive Complete Third. At a staggering 69 tracks, the 3 CD package represents the collection of all known Third-related material.

The first disc in the set is subtitled “Demos to Sessions to Roughs,” and includes disarmingly intimate readings of songs that would end up on the finished album. “Like St. Joan” is an early demo of “Kanga Roo,” and Chilton’s voice and acoustic guitar are the only sounds you’ll hear. It’s heartbreaking in its intensity, and sets the tone for much of the music to follow.

Other demos showcase songs that wouldn’t make it to the final record. The delightful “Lovely Day” is very much a piece of #1 Record‘s “Thirteen” and Radio City‘s “I’m in Love with a Girl.” A voice-and-electric-guitar demo of “Downs” is more “together” and rocking than the official version. An acoustic demo of “Thank You Friends” brings the song’s lyrical sarcasm to the fore in a way that the full-band version does not. The demo for “Holocaust” differs little from the finished version: Chilton at an acoustic piano, singing his original heartbreaking lyrics over a dark melody that’s a dead ringer for Yoko Ono‘s 1971 composition “Mrs. Lennon.” A stunning version of the Beach Boys‘ “Don’t Worry Baby” is a highlight of the first disc.

Taken as a whole, most of the recordings on the first disc of Complete Third show a Chilton very much in command of his faculties, nothing like the dissolute character at the heart of the album as it’s been known for decades. But more was to come. By the time of Chilton’s duet with girlfriend Lesa Aldredge – a cover of the Beatles’ “I’m So Tired” – things start to fall apart. And “Pre-Downs” is every bit as shambolic as anything on Chilton’s notorious 1979 Like Flies on Sherbert album. Of note is producer Jim Dickinson‘s rough (but full-band) mix of “Thank You Friends,” featuring a more intimate arrangement (but missing Chilton’s final vocal, the “doot-doo” backing harmonies and the tasty orchestration). With nearly half of its tracks previously unreleased, the first disc is essential listening.

Complete Third‘s second disc (“Roughs to Mixes”) is comprised almost completely of previously-unheard material; most tracks are early mixes overseen by Dickinson or studio engineer John Fry. Some listeners will prefer these mixes to the more well-known ones; the differences are sometimes minor, sometimes significant. Highlights include a ragged run-through of Jerry Lee Lewis‘ “Whole Lotta Shakin’ Goin’ On” and a stripped-down mix of Stephens’ beautiful “For You.”

“Nightime” is full of eerie, disquieting sounds. A bleak “Nature Boy” features Chilton and piano in an echo chamber. Even in its offhand delivery, Aldredge’s cover of the Velvet Underground’s “After Hours” arguably bests the original with its disarming simplicity. A longer edit of “Mañana” is featured; on the finished album it has always been an unlisted intro to “Jesus Christ.” Several of the mixes on the second disc showcase Carl Marsh‘s baroque string arrangements.

The third disc of Complete Third brings together 20 final masters, and will be familiar to those who’ve enjoyed previous releases of the album. It’s here for completeness’ sake.