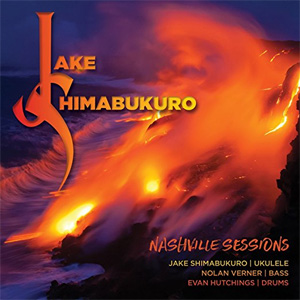 Generally associated with Hawaiian music and culture, in recent years the ukulele has gained wider acceptance and credibility as a musical instrument suitable for other genres. To the uninitiated, the term “ukulele virtuoso” might seem a kind of joke, but there’s no doubt as to Shimabukuro’s astounding facility on the tiny four-stringed instrument. He’s quite prolific: Nashville Sessions is his 22nd solo album since 2002 (though half of those are Japan-only releases). This latest release finds him fronting a power trio, and – thanks to inventive and somewhat unprecedented use of effects – he often sounds more like an electric guitar shredder fronting a jazz-rock band. The interplay between him, bassist Nolan Verner and drummer Evan Hutchings is often thrilling; Shimabukuro allows the rhythm section space to display their chops, and ambitious tunes like “6/8” show the passion, grace and fire of the trio.