Blue October: Not so Blue Anymore

Texas-based Blue October enjoyed a half dozen or so charting singles in the first decade of the 21st century; their angst-filled songs struck a chord with listeners who – though weaned on a steady diet of “emo” – wanted something that rocked more. But toward the end of that decade, leader Justin Furstenfeld spiraled into depression, a condition caused by and/or made worse by the crumbling of his marriage and substance abuse. Eventually, he started getting the help he needed. But by the time of the release of the band’s 2013 album Sway, every track would be marked “explicit” on playlists; clearly Furstenfeld was still going through rough times.

What a difference a couple of years can make. Today, Justin Furstenfeld is in a much happier place, and he’s confronting head-on many of the issues that led to his problems. That renewed sense of being is manifested in the uncharacteristically upbeat Home, released in 2016. 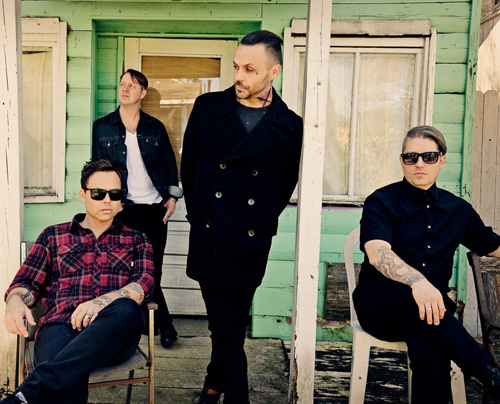 “You can start your day over whenever you want to,” says Furstenfeld, now nearly five years sober. “I’ve been taking [antidepressant prescription drug] Paxil since I was 14,” he says, “but it never worked, because I put alcohol and drugs on top of it. I would just sit at home and mope.” These days he has a new approach to life. “I’m active, I focus on the positive,” he says. “I don’t feed my negativity with alcohol and drugs; I wake up clear-headed and I empower myself every day to make healthy decisions.”

That outlook is reflected in his lyrics. Unlike the tortured, melancholy subject matter of Blue October’s earlier music, the songs on Home effectively convey Furstenfeld’s healthier mental and emotional state. Looking back at his earlier music, Furstenfeld observes that “I was a selfish writer back then. I thought that the world revolved around me. I used to self-medicate a lot and call it experimentation, when in actuality it was more of a crutch. And it was quite the negative influence on my life.”

Fast-forward to current day. “What a glow when you’re living true,” sings Furstenfeld on the title track and single off Home. “Truly I can’t wait to see what’s around the corner.” The songwriter’s hard-won positivity shines through most all of the tracks on the record. “It’s insane how positivity is just a magnetic form,” he says, noting that the somewhat radical change in Blue October’s lyrics hasn’t cost them their fan base. The band’s followers “have made that change with me, and we’ve gotten new ones,” Furstenfeld says.

The charts and sales figures back that up: Home peaked at #19 on the Billboard 200 album chart. Not a bad showing for a band that left its major label nearly 7 years ago. While he admits that owning his own record label (UpDown Records) is a lot of work, the creative control makes it worth the effort. “It was a smart move” on the part of both the band and their old label, Universal, to part ways, Furstenfeld says. “I’d like each album to average around 100,000 sold; they like to average around a million.”

Furstenfeld says that running his own label means that “I can go hand-pick my radio team and my marketing team, and then I can stay on top of it, personally, to make sure it’s being done right. I can have weekly meetings with all of them to see what we’ve done, how we’re doing, what the numbers are looking like.”

Lest it seem that Furstenfeld now thinks of Blue October in purely commercial terms, he sums up his philosophy about making music and being in a band. “Our definition of success at Blue October and UpDown Records is that we have a roof over our head, our children are taken care of, and we have wives that love us. That’s the bottom line. You don’t have to be rich; you just have to be rich in love.”