Making Success out of … Failure

Though Failure‘s third album, 1997’s Fantastic Planet received good reviews and spawned a moderately-successful single (“Stuck on You”), the band couldn’t capitalize or build on that success. Though the group had gotten off to a promising start, guitarist Ken Andrews admits that Failure’s name would – for a long time, at least – turn out to be a self-fulfilling prophecy. 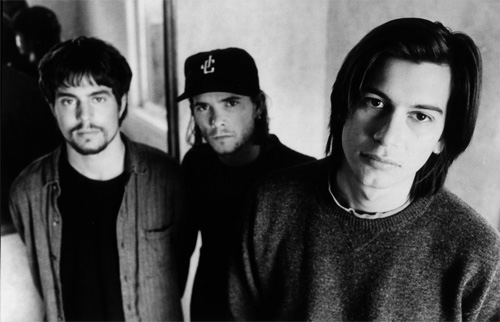 Does Andrews regret the band’s choice of a name? “Sure, all the time,” he concedes. “At the beginning, I didn’t take it very seriously; it was a bit of a joke.” Andrews notes that the execs at Slash Records absolutely loved it. “It was part of the reason they wanted to sign us!” He says that there have been times when he thought, “It’s so ‘anti,’ such a crazy thing to name your band. And there have been times when I’ve thought, ‘What the fuck were we thinking?’”

After a pair of well-received albums – 1992’s Comfort and Magnified from 1994 – Failure began work on what would become Fantastic Planet. An ambitious work created as a complete work rather than a collection of tracks, Fantastic Planet had the misfortune of being finished right as Slash Records neared collapse. The owners of the label were seeking a buyer, and didn’t have any interest in releasing Failure’s third album. Eventually Warner Brothers stepped in to buy Failure’s contract, but a year and a half had passed between Fantastic Planet‘s completion and eventual release.

Making matters worse – much worse, in fact – the band members had descended into serious drug addiction. Failure “ceased to function in ’97,” Andrews says. “We couldn’t play shows; we couldn’t write a song. It wouldn’t have surprised a lot of people if some of us would have turned up dead at that point.”

Sixteen years passed after Failure’s unceremonious demise. During that time the former members – Andrews, bassist Greg Edwards and drummer Kellii Scott – all went on to other musical projects. Andrews became a sought-after producer and recording engineer. Edwards formed Autolux, and Scott went on to play with Blinker the Star, Veruca Salt and Dr. Dre. But more importantly, in the years following Failure’s breakup, the three musicians who made Fantastic Planet got clean and sober.

Andrews says that far as interaction between him and his former band mates, “there were seven or eight years of nothing. There were years of figuring out all of that stuff before we could even really start to have a relationship as friends again.” Slowly they did rekindle their friendships. Andrews believes that marriage and parenthood stabilized the Failure musicians, helping them to “get back together as the good friends that we were when the band first started out. Then it became easy and natural to re-approach the music again.”

Failure got back together in 2014, and soon thereafter recorded and released The Heart is a Monster. Currently they’re commemorating the 20th anniversary of Fantastic Planet; shows feature the album performed in its entirety. That start-to-finish approach showcases the album’s seamless quality; each song connects into the next. Andrews explains that back in ’95-’96, Failure “spent 4 weeks going back and modifying the songs’ intros and the outros. To us, every transition was a moment to do something interesting. Even if it didn’t have a lyrical continuation, we wanted [the transitions between songs] to at least have some sonic or musical flow.”

Fantastic Planet doesn’t sound dated; it has worn better than many other albums of its era. “I think that’s part of the reason we’re out here right now,” says Andrews. “People still listen to that record all of the time, and maybe in a less nostalgic way than they listen to other records from the ‘90s.”

Circling back around to the band’s perhaps unfortunate name, Andrews is a bit more philosophical. “At this point, it just is what it is,” he says. “We’ve been around long enough now that … we’re just Failure. That’s all there is to it.”

An edited version of this feature appeared previously in Colorado Springs Independent.