Sweet Claudette: What We Learned at Bird Camp

On their 2013 For the Birds EP, Sweet Claudette successfully blended classic country and Americana, delivering six original tunes in an intimate, homespun style that focused on their vocal strengths. But on Whiskey Drunk on Puppy Love, the Asheville foursome has taken a giant leap forward, incorporating Stax and Motown textures into the mix, creating an album of fully-realized pop perfection. 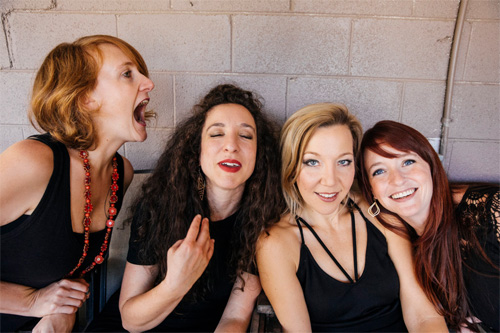 The group believes that there’s plenty of room left to explore in the styles of Memphis’ Stax and Detroit’s Motown. And many of the original tunes on Whiskey Drunk on Puppy Love are cast in that mold. “Genres never get exhausted; there’s always room for more,” says Amanda Platt, one of Sweet Claudette’s four songwriter-vocalists. “To have original music in a classic genre is a great thing, and should absolutely be continued.”

In the hands of skilled singers and songwriters, classic-styled arrangements provide infinite possibilities. “One of my personal favorite things is backup vocals,” says the group’s Dulci Ellenberger. “I love singing them and writing them. And I love hearing all of our ideas come together. If you’ve got it, you may as well use it.”

The group – originally called For the Birds – first came together in 2010 when Melissa Hyman organized the second in a series of women’s songwriter showcases. She admits that her initial motivation for the series was to “meet and play music the women in town whom I really admired as songwriters and performers.” But once she discovered the joys of working with Ellenberger, Platt and Amber Sims, her energies quickly shifted to the vocal quartet. “I ended up with this incredible group, and we didn’t want to stop playing together,” Hyman says. “The showcase didn’t survive, because I was too busy having another band!”

These days, all four are busy with multiple projects: Ellenberger sings with Holy Ghost Tent Revival; Hyman makes music with husband Ryan Furstenburg as The Moon and You. Platt leads the Honeycutters. And Amber Sankaran has started writing songs: “The Other Shoe” is “the poppiest, hookiest, most ear-catching song” on Whiskey Drunk on Puppy Love, says Ellenbeger.

In fact, the album provides a lot of competition for that distinction. With four songwriters contributing songs, there’s no shortage of top-notch material for an album. Many songs arise out of Sweet Claudette’s annual retreat. “We do what we call Bird Camp,” explains Platt. “We hole up somewhere where there are no distractions – no boys – and we learn new songs.”

The group’s individual songwriting styles provide variety, yet there’s a unity and cohesiveness among the tunes no matter who has written them. “More than any of us, Dulci writes with ‘space’ left for background vocals,” says Platt. And Bird Camp’s collaborative nature imbues the songs with that Sweet Claudette aesthetic. “That’s a cool thing about how the songwriting works,” Platt says. “We bring a whole lot of data, but we don’t bring the production of the songs. That’s> the collaboration.”

The album title Whiskey Drunk on Puppy Love is equal parts saucy and playful; those adjectives aptly sum up the vibe of Sweet Claudette’s music. Sims came up with the title, drawn from the lyric of Platt’s “One More Taste,” another standout track on an album full of gems. 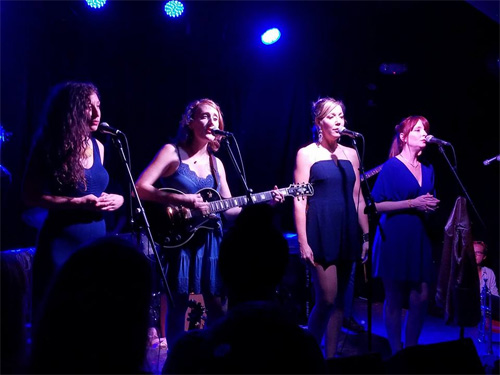 Sweet Claudette onstage at the Mothlight in Asheville NC. Photo by Bill Kopp

The band’s friend and longtime associate Daniel Shearin of River Whyless produced Whiskey Drunk on Puppy Love. “He produced For the Birds as well,” notes Ellenberger. “He’s been with us since we were just a little acoustic four-piece with no rhythm section.”

“Dan will be our producer as long as he will have us,” adds Hyman.

Each of the four singers has her own specific vocal range; together, the group has the ability to create vocal clusters that give the music a great deal of texture. “My voice is clearly the lowest,” says Hyman, whose pipes are showcased on the thrilling “Don’t Have Time.” Platt’s range is a bit higher, with Ellenberger and Sims working more in the upper register. “There’s a learning curve,” explains Hyman, “a constant evolution of fitting together. Like, ‘here, we’re going to be moving in thirds as a chord. And here we’re gonna weave in and out and do some counterpoint.’ I think that stuff has gotten more sophisticated over time with us.”

Though great care goes into songwriting and instrumental arrangements – the foursome are joined onstage by a rhythm section dubbed “The Claudes” – it’s those lush, carefully worked-out vocal harmonies that are the group’s most distinctive quality. “When we all sing together, that’s the voice of Sweet Claudette,” says Dulci Ellenberger. “Sweet Claudette makes it complete.”