There aren’t many rock bands that feature the sitar as a primary instrument. But Montreal-based Elephant Stone does, and the band incorporates the Indian classical acoustic instrument into its modern sound. The 18-plus stringed sitar first entered Western pop culture in the mid 1960s via the Beatles, and is most often associated with that era of pop music. 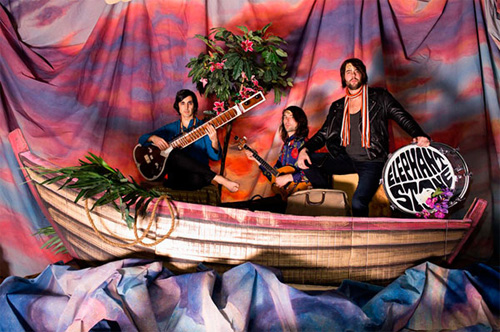 But Elephant Stone’s leader and songwriter Rhisi Dhir isn’t concerned about the group being painted into a stylistic corner because of its unique choice of instrumentation. “I only use sitar when I feel a song can benefit from it,” he says. “It’s just another tool in my palette.” Elephant Stone’s albums tend to place the pop songs up front. “Side B is where I get experimental,” says Dhir.

Released in September, Ship of Fools is Elephant Stone’s fourth album. One of the highlights on the new record’s second side is “Silence Can Say So Much.” Dhir describes it as “the most fusion-y song I’ve ever done. And it was all written on the sitar.” A relatively more modern instrument is at the center of “Love is Like a Spinning Wheel,” another standout track on the new album. On that track, the centerpiece instrument is an electric sitar, a somewhat gimmicky modified guitar that was a fixture of late-sixties pop tunes like “Green Tambourine” by the Lemon Pipers.

In general, though, for Ship of Fools Elephant Stone has dialed back some of its overt 1960s textures in favor of a more beat-focused, dance-oriented style. “As you get older,” Dhir believes, “different influences come through.” He says that the experience of regular touring has influenced the band’s sound. “The beat and the rhythm becomes more of a focus point. That’s definitely where my head is now, and on the new record.”

Though Elephant Stone – which also includes guitarist Jean-Gabriel Lambert and drummer Miles Dupire-Gagon – enjoys touring, Dhir is unabashed about his love of writing and recording. “From the moment I get the inspiration for a melody to the final product,” he says, “the whole process of making a record is joyful for me.”