Of Montreal’s Kevin Barnes Lives in the Moment

Operating just under the radar of the commercial pop landscape, of Montreal nonetheless makes undeniably catchy – if not truly mass-market oriented – pop music. Originally part of the Elephant 6 Collective that spawned Neutral Milk Hotel, Elf Power and Apples in Stereo, of Montreal moved beyond that scene to develop into a vehicle for leader Kevin Barnes‘ artistic excursions. 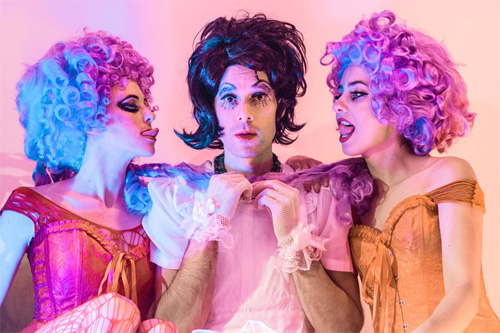 The group’s 14th and latest studio album, Innocence Reaches marks a return to the dance- and synthesizer-focused sounds of the group circa 2004. But Barnes says that direction was as much a product of necessity as anything else. “The studio I was working at in Paris only had synthesizers and drum machines,” he says. But he’s a willing participant in making that kind of music: “From there, I sort of caught the bug again, and started working more with those instruments.”

While Barnes’ songs are consistently hooky and memorable, he insists that he never sets out to make commercial-sounding music. “I never think about how things will be perceived,” he says. “I never think about an audience.” His philosophy on creating is straightforward. “You can’t really worry about pleasing people, giving people what they want or anything like that,” he says. “Just do your own thing; do what feels exciting in the moment. Don’t question it.”

Though of Montreal’s current set list features occasional forays into the back catalog – recasting songs from, say, 2005’s The Sunlandic Twins in the more dance-oriented style – Barnes isn’t especially interested in the past. He acknowledges his Elephant 6 origins only “to put that into some sort of historical perspective,” noting that he hasn’t done any projects with other Collective members in over a decade.

Barnes’ drive to keep moving, to constantly do something different means that he’s the sole constant among of Montreal members. The group’s lineup is almost always in flux. “That’s just me wanting to go in different directions and find the right personnel” for each project, he says. “So if I want to do something more electronic, then I’ll find people to play that style.” He describes the lineup changes as the result of “wanting to find the right people to help me realize the vision that I have at the moment.”

In fact, several of Montreal albums have been the product of Barnes working alone in the studio. There he can build and layer his sonic creations. When recording, he’s unconcerned about the ability to recreate the studio arrangements on subsequent live dates. “I wouldn’t want to have any restrictions in my mind when I’m producing or arranging a song in the studio,” he says. He cites the music he fell in love with when he was young, mid-’60s releases like the Beatles‘ Sgt. Pepper’s Lonely Hearts Club Band and the Beach Boys‘ Pet Sounds. He describes those albums as “ very dense … very difficult for any group of people to pull off. But people still listen to those records. And I think more along those terms.”

Barnes admits that on occasion he’ll write and record a particular song just because it strikes him as potentially being fun to play live. But in the main, he says that “if I just get in to the architecture of it all, wanting to make something that is compositionally interesting, unpredictable and challenging, I won’t really think about the live aspect.”

Other than bending his songs toward a particular style – electronic pop, dance, psychedelic, progressive; of Montreal has trafficked in all those and more – Barnes says that onstage he tends to stick with the arrangements that work for him. “Bob Dylan has probably done a hundred different versions of ‘Blowing in the Wind,’ and that’s exciting for him,” Barnes observes. “But for me, I tend to sort of stick with the studio album arrangement. I feel like … it’s just what it is.”