In the music business, Tony Visconti is something of a household name. Since his start in 1968, Visconti has produced more than 120 albums for a wide variety of artists, including more than a dozen for David Bowie. He’s worked in a variety of musical genres, but is most closely associated with rock, and a large percentage of his production duties have been on albums by British artists. Esperanza Spalding, on the other hand, is described by some as a bass-wielding cross between Joni Mitchell and Michael Jackson. So what led Esperanza Spalding to choose Visconti to co-produce the sessions that would become Emily’s D+Evolution ‘s heady mix of rock/funk/soul/jazz/hip-hop?

Spalding had in fact already recorded much of Emily’s D+Evolution before deciding to work with a co-producer. “I didn’t know if this record was valid, or if it was any good to anybody other than me,” Spalding says. She knew she didn’t want to work with someone intent on making her music “sound like a jazz record.” Spalding was especially impressed with Visconti’s production work on David Bowie’s 2013 album, The Next Day. “It has a lot of acoustic instrumentation, and yet it’s still sounds like you’re getting slapped in the face,” she chuckles. “And I wanted that sound.” 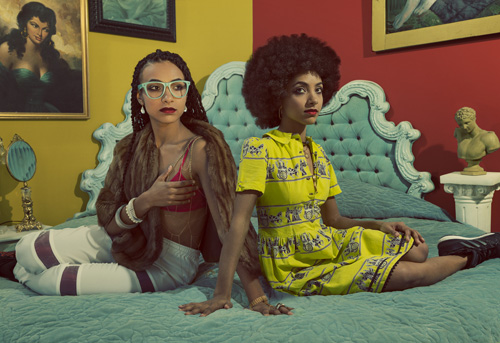 Visconti is “a unique character in that he knows so much,” explains Spalding. “He’s been through the whole arc of rock and roll and jazz. And he has a classical background. He can arrange for orchestra.” That background, Spalding believes, meant that Visconti would be a good person to “endorse” – that’s her word – the music she had been writing and recording. “I thought, ‘if someone like Tony Visconti understands this record, then I’m good.’ And he did.”

The bassist-vocalist-composer characterizes Tony Visconti’s approach to the Emily’s D+Evolution project as “hands off in all the right ways,” but notes that Visconti was “hands in” concerning studio matters in which his mastery is well-established. An earlier “technical snafu” meant that nearly half of the tracks cut before Visconti came on board would have to be re-recorded, but Spalding is grateful for what might have seemed like a serious setback. “His spirit did need to be in this,” she believes. “And it would have sucked if all the songs that he worked on weren’t on the record.”

Though she initially needed – and earned – that coveted endorsement of Emily’s D+Evolution, Spalding has moved forward from that place. “Now I know better. Because I’m older; I know that you don’t need authorization. But for a while it was that emotional or spiritual development, artistic development that I needed: an endorsement to feel confident enough to release this to the world.” 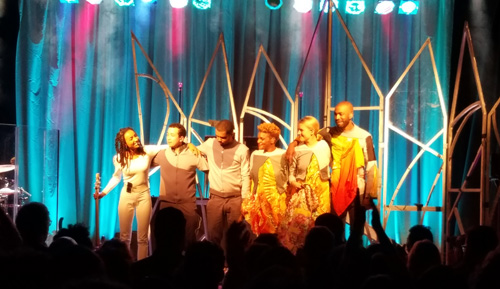 Spalding’s first album, 2006’s Junjo, was a straight-ahead jazz release that received good notices but didn’t chart. But by the time of her fourth record, 2012’s Radio Music Society, the bassist was selling over 100,000 copies, topping the jazz charts, and enjoying crossover success. The small label to which she was signed was absorbed into the larger Concord Records, but when her contract was up for renewal, she didn’t jump ship.

“I like them,” she says of the Concord staff. “They really are champions of me exploring, which is not something that most record labels want to invest in. I don’t sell hundreds of thousands of records,” she says, “but they still treat me like I do … and that’s really priceless. Any person in a record contract will understand how profoundly special that is.”

Meanwhile, Emily’s D+Evolution isn’t just an album. It’s the basis for Spalding’s live show. She describes the pre-Visconti sessions: “We were going to bring in an audience; they were going to watch us from the control room.” The songs – delivered in a specific order – would tell a story. “We would hit ‘record,’ and we would play the record from the top to the bottom. And that would be the album.” Even though the sessions didn’t ultimately work out that way, that linear storytelling approach informs the live presentation of the material. “The record is one aspect of the project,” Spalding says. “But the bigger aspect of the project, I would say, is the performance, the staging and the storytelling that is done through dramaturgy. That, for me, is the meat of the project.”

From her start, Spalding has sought to develop her already formidable instrumental chops as well as her songwriting and arranging skills. While those earlier albums are rooted in bossa nova and other jazz styles, the music she makes today is a kind of pan-genre amalgam informed by soul, funk, hip-hop and rock. “I think all art can interact with people, but I don’t expect people to walk by quietly and observe what I do,” Spalding says. “I want it to feel like it’s a conversation; it’s there to be engaged with.”