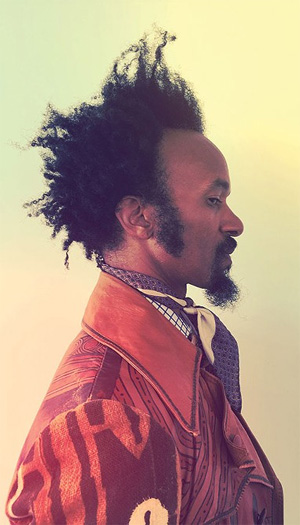 The story of Fantastic Negrito is the stuff of Hollywood legends. But it has the distinction of being true: the man born Xavier Dphrepaulezz taught himself to play a multitude of instruments, scored a record deal, made a good album that stiffed, had a car wreck and nearly died, worked his way back to health, reinvented himself musically, and got himself discovered all over again. With its blend of folk, blues, soul and punk attitude, his latest album, The Last Days of Oakland, is one of 2016’s most intriguing releases.

The Last Days of Oakland‘s “About a Bird” has a soul and gospel feel, but its guitar solo is steeped in Chicago blues. The piano break on “Scary Woman” leans in a jazz direction. “What Do You Do” is reminiscent of the field hollers that historian Alan Lomax documented in the 1940s. Fantastic Negrito’s music resists easy categorization, and that pleases him.

“I am most quoted as saying that genre is a good place to hide,” he says. “Biggie Smalls is just as amazing as Johnny Cash; Kendrick Lamar is just as amazing as Tchaikovsky. Creativity is creativity.” He points out that he’s toured and played with artists as diverse as Talib Kweli and Chris Cornell. “The audience and people that come, they come if you’re connecting with them,” he says.

In 1996, simply calling himself Xavier, Dphrepaulezz recorded the album X Factor. Its standout track, “Saturday Song,” received some airplay, but the record sold poorly. Looking back at that era, Fantastic Negrito says that he sees a different person than whom he is today. “That was me trying to do something. Now I just do it.”

One November night in 1999, Dphrepaulezz picked up a girl he saw on a street corner. “I was living in that L.A. lifestyle,” he recalls, “picking up women and partying.” The next thing he knew, three weeks had passed. The car he was driving had been hit by another motorist, and he spent weeks in a coma. His hands were destroyed. His label dropped him. He never saw the girl again.

But he spent years fighting his way back to music. In 2015, Dphrepaulezz entered a homemade music video into a contest. He and nearly 7000 other musicians vied for an appearance on Bob Boilen‘s popular and influential “Tiny Desk Concerts” program on NPR. Billing himself for the first time as Fantastic Negrito, Dphrepaulezz won. The subsequent 15-minute performance gained him new recognition. Boilen was moved both by the musician’s back story and by his deeply soulful, expressive performance. Boilen devotes an entire chapter to Fantastic Negrito in his new book, Your Song Changed My Life. 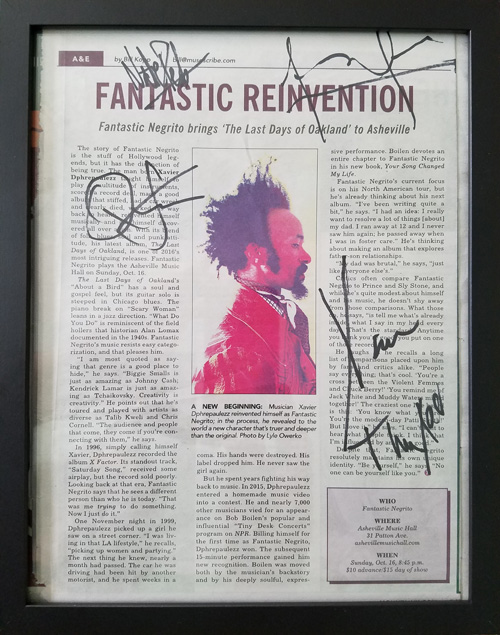 Fantastic Negrito’s current focus is on his North American tour, but he’s already thinking about his next album. “I’ve been writing quite a bit,” he says. “I had an idea: I really want to resolve a lot of things [about] my dad. I ran away at 12 and I never saw him again; he passed away when I was in foster care.” He’s thinking about making an album that explores father-son relationships. “My dad was brutal,” he says, “just like everyone else’s.”

Critics often compare Fantastic Negrito to Prince and Sly Stone, and while he’s quite modest about himself and his music, he doesn’t shy away from those comparisons. What those do, he says, “is tell me what’s already inside, what I say in my head every day: ‘That’s the standard. Any time you think you’re good, you put on one of those records.’”

He laughs as he recalls a long list of comparisons placed upon him by fans and critics alike. “People say everything; that’s cool. ‘You’re a cross between the Violent Femmes and Chuck Berry!’ ‘You remind me of Jack White and Muddy Waters mixed together!’ The craziest one I’ve heard is this: ‘You know what you are? You’re the modern-day Patti Smith!’ But I love it,” he says. “I can’t wait to hear what people think. I think that I’m influenced by anything good.” Despite that, Fantastic Negrito resolutely maintains his own unique identity. “Be yourself,” he says. “No one can be yourself like you.”