Though he initially made his name as part of industrial band Front Line Assembly and as a producer of other artists, these days Vancouver-born Rhys Fulber makes highly melodic electronic music under the name Conjure One. Though his other work is sonically aggressive and dance-oriented, “that’s not the kind of music [Conjure One] is, not at all.” and he acknowledges that some fans of his earlier work “don’t even like” the music he makes now.

With Conjure One, Fulber focuses on melody and emotion. “I love electronic music; I always have,” he says. “And I do love a lot of elements of dance music, but the things that I really enjoy are songs, songwriting and melodies.” He wants his musical creations to still sound good years from now. “I’m trying to make music that’s not gonna sound old. I think that by working out melodies – and also putting a lot of emotion into the music – it’s something that can still hold up.” 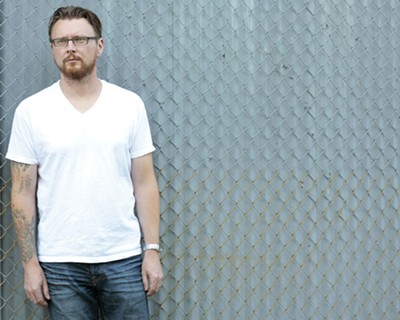 Although the instrumental makeup of Conjure One’s music – as showcased on four albums including 2015’s Holoscenic – focuses on synthesizers, the songs themselves are generally composed and developed on acoustic instruments. “My goal, when I make music, is to make something that could be played on a piano or an acoustic guitar,” Fulber explains. He tries to create “something that would hold up outside of the bells and whistles of electronic music. That’s my main thing; when I put a song together, it’s usually just worked out on a piano. And then when it sounds like a song, then I make it electronic.”

Fulber was immersed in music from an early age; his dad played in a punk band and ran a recording studio. He discovered electronic music, and was drawn into the expressive pop soundscapes of Orchestral Manoeuvres in the Dark. “I loved all those early records,” says Fulber, “the way that they were experimental but still poppy. Those were very formative records for me when I first started.” He also was captivated by the music of French synthesist Jean-Michel Jarre.

And though he started out as a drummer (“jazz drumming was my thing”), everything changed when Fulber got his first synthesizer. “I love electronic music just by virtue of the sound,” he says. “And I always thought electronic music was – or had the possibility to be – emotional.” He notes that most film scores are built upon an electronic foundation. “They can have a lot of emotional power.” From the beginning of his work in electronic music, Fulber worked on analog machines like his first keyboard (a Roland Juno 106), as well as legendary synthesizers like the Sequential Circuits Pro-One and the Minimoog.

Another virtue of working in electronica – from Fulber’s point of view, at least – is that he can do it by himself (though his songs and live performances often feature stellar female vocalists). He says that with synthesizers, “I can paint the whole picture here on my own; I don’t have to deal with other people. I played in a band when I was a teenager, and I thought, ‘I don’t want to always be in conflict with people; I want to be able to put some ideas together.’ And that’s sort of what got me into it in the first place.”

Fulber’s lush, expressive and carefully-crafted songs are products of the studio, but the Conjure One onstage setup aims to create a live, in-the-moment version of the music. “As much as possible, I try to run live sequences. I manipulate things, I play keyboards, and I also re-work the backing tracks. So when you go see [Conjure One] live, it’s not just a reprint of the CD, or just a singer singing over the same instrumental tracks. I don’t want to do that,” Fulber says. “I make it as live as it can be.”