River Whyless: Out from Behind the Tiny Desk

When beginning work on what would be their second full-length album, the four musicians of Asheville-based River Whyless decided to change their approach to songwriting. The result of that change is showcased on We All the Light. Bassist Daniel Shearing describes the new method as “more building fresh from the beginning, and not so much tearing apart.”

The River Whyless sound doesn’t lend itself to easy categorization; listeners may hear hints of everything from the Decemberists to Paul Simon to the O Brother, Where Art Thou? soundtrack to Peter Gabriel. The music on We All the Light is folk-flavored, but with a definite pop-leaning sensibility. “We were struggling for awhile to find common ground,” explains drummer Alex McWalters, “and one of the things we came together on was a more straightforward approach, a little bit poppier and more concise way of doing things. And that got us all excited.” 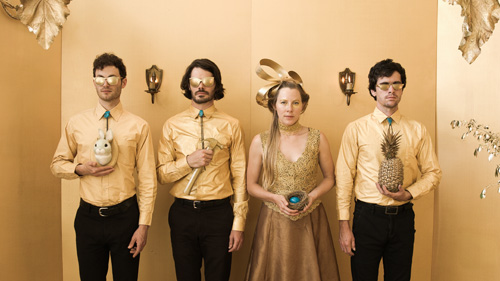 “We’re not consciously crafting the record to sound any certain way,” adds guitarist Ryan O’Keefe. “It’s just [the product of] how we’re feeling at the time, and the kind of music that inspires us.” Shearing describes “Baby Brother” and the 10 other songs on We All the Light as the realization of “a grab-bag approach. The three of us – Halli [Anderson, violin], Ryan and myself – write a lot of songs. In the past we’d bring an essentially completed song to the table. And then the four of us would tear it apart and rebuild it in a completely new way.” But for We All the Light, they instead brought “little bits of kindling,” says Shearing. “One of us would have a verse, or Alex would have a drum beat. And we’d start from scratch. That approach is fairly new to this band.”

All four members are longtime friends from college. The quartet came together in 2011 when Shearing joined the other three musicians, who had just finished recording their debut album, 2012’s A Stone, A Leaf, An Unfound Door. He came on board just in time for the opening show on the album’s release date. In addition to his bass guitar, Shearing’s harmonium adds one of several distinctive elements to the group’s rich instrumental mix. When he first joined the band, he tried to buy one of the small pump organs from a Craigslist seller, but they couldn’t come to terms. “I came to the band and said, ‘This just happened, and it’s terrible!’” Shearing recalls. “But a week later, Ryan ordered one on Ebay.”

River Whyless got a major break after attending last year’s AmericanaFest in Nashville. NPR radio host Bob Boilen took notice of the group, and invited them to appear on his influential Tiny Desk Concerts program. Delivering stripped-down arrangement of three tunes that would eventually appear on We All the Light, the group found their profile raised significantly. Boilen “did sort of take us under his wing,” says violinist Halli Anderson. “Tiny Desk was so much fun. It was a really special moment. When we play live now, more people know the words, because of Tiny Desk. It was a big deal for us, and it pushed us forward into having a larger and different kind of fan base coming out to our live shows.”

Tiny Desk Concerts would in fact be only one of several high-profile opportunities for River Whyless. Late last month they returned to Nashville for a second AmericanaFest appearance; also in September they performed on WXPN’s World Cafe. Opportunities like these help bring the group’s music to new audiences who are more predisposed to appreciate their brand of music. “It’s not just one thing that’s going to pluck you out of obscurity, moving you forward in big leaps,” concedes O’Keefe. “Triple-A [Adult Album Alternative] radio, things like Tiny Desk, articles … all those have to combine to help a career.”

Though their current tour includes a show at Las Vegas’ House of Blues and the revered Mountain Stage in West Virginia, the four musicians of River Whyless are most excited about their Orange Peel date. “That one’s going to be our ideal show,” promises Shearing. “We’re going to get to do everything we’ve always hoped and dreamed to do onstage. And it’s our hometown, so you can’t beat that.”