Underhill Rose: Thorns and All

With three enthusiastically-received studio albums to their credit, Asheville-based Americana trio Underhill Rose has decided to cut a live album, something that songwriter/banjoist/vocalist Eleanor Underhill hopes will “represent the core trio’s sound. That’s a lot of the Underhill Rose world we live in, because we tour as the trio. So we wanted to capture that.” Recording sessions for the as-yet-untitled album took the form of a pair of shows at the Altamont Theatre on September 16.

Underhill says that the trio – herself on banjo and vocals, plus guitarist Molly Rose and upright bassist Salley Williamson – is tighter musically than they’ve ever been. “We love doing the studio album stuff with all the bells and whistles,” she says, “but I think it’s time to share the stripped down version of what we do.” 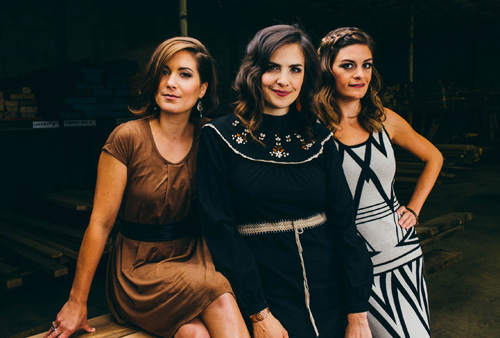 The group chose to record in front of a hometown crowd at the Altamont for very specific reasons. “We really want to bring that energy of the live audience into the recording somehow,” Underhill says. “I’ve seen quite a few shows there. It’s intimate, and it has great sound.” The fact that they performed two (separately-ticketed) show that night was a factor, too. “We didn’t want a room that we couldn’t fill up, hopefully twice.” she sums up the Altamont’s virtues: “The right size, great sound, good vibes, intimate, but large enough to fit our community of fans.”

Plans call for the live album – due for release sometime in 2017 – to be compiled from recordings made at the two Asheville shows, plus two more the following night in Lexington, N.C. That necessitates doing essentially the same set for all four performances. “The album will include a collection of best-ofs from all 3 of our albums, songs that we feel that people have really been drawn to the most,” Underhill says. She says the set will also feature “some songs that we feel did not get their day yet.”

At press time, some surprises may have been in store for those attending the shows. Underhill teases that as much as a fourth of the set might include “some wildcards that we’re thinking could be on the album … if we nail them. And if we don’t get it, it’s okay; we have our core songs that we definitely want to get on the album.” These shows will represent the last chance for U.S. audiences to see Underhill Rose before the group leaves for a tour of Ireland and the U.K.

Underhill Rose has run successful Kickstarter campaigns for two albums to date. But they’re not taking that approach to making the live album. “We want to give our fans a break from being asked for money,” Underhill says. “Because that’s not fun for anyone.” The group plans to draw upon their own savings to cover the expenses associated with making the album. Underhill allows that the finished album might even be a double-disc set.

Jason Merritt was the studio engineer on Underhill Rose’s albums Something Real (released in 2013) and 2015’s The Great Tomorrow. And the trio has chosen him to run the remote recording console for the live dates. “He is our buddy,” Underhill says. “He understands what we do; he’s recorded our voices. From an audio standpoint, he knows us better than anyone.”

The goal is to capture the live performances, mix them down and compile an album. The trio will be attending the AmericanaFest in Nashville later this month. “We may be shopping around some raw [recordings] to some record labels or some distribution companies,” Underhill says. “ Something may come of that, or it may not. And if not, it’s all good. The last two albums have done fairly well on the charts, so we’ll see what happens. It’s a crazy industry.”

Perhaps surprisingly, one thing the group will not be doing is filming the performances. “When trying to engage an audience, record something audio-wise and record video, I find – for myself – that I get too ‘in my head,’” Underhill explains. She would prefer to focus on the music. “I want to hit the notes.”

In keeping with the goal of “keeping it authentic,” Underhill Rose plans to refrain from post-production fixes and overdubbing. “I say that now,” Underhill laughs, “but no one has signed a paper saying that we will absolutely not” correct any mistakes. “But that’s the plan.”