Musician’s Workshop is a North Asheville landmark. While other business – not to mention entire buildings – have come and gone along the Merrimon Avenue corridor in the last half century, the relatively small yet well-appointed instrument shop has persevered, a reliable, go-to resource for pro and amateur musicians alike.

Moritz Music started business at 319 Merrimon Avenue in 1967. Musician’s Workshop co-owner Frank Dosier says that John and Mary Moritz opened the shop as “a retirement hobby.” The family had previously owned 17 stores in Florida. The store was one of several competitive music stores in and around Asheville, and carried pianos as well as stringed instruments. Dosier says that Moritz “rented it out for cheap, put out a few pianos and a few guitars.”

Dosier grew up in North Asheville. “Riding home from school, I saw drums in the window,” he recalls. “Being a musician, I thought, ‘That’s a drum set!’ Jobs were hard to get. My mom took me home, put on some nicer clothes, and took me back there.” The young teen had to be prodded, but he went in, and approached Moritz, asking if he needed any help. “He must have been more tired and worn out than anything, so he said yes.” At the time minimum wage was $1.25 an hour. “I was very demoralized to find out I was going to make $1.10.” 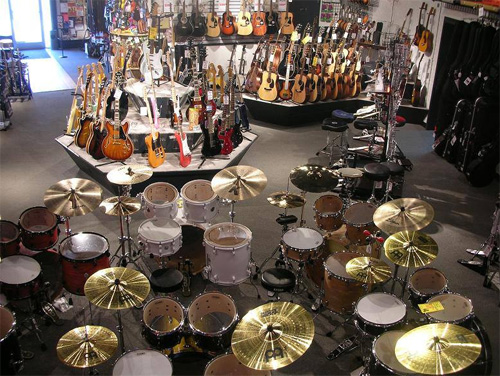 Still, Dosier’s responsibilities grew quickly. “I was the only one who could tune a guitar,” he chuckles. “In later years, it was my job to come in every day after school and tune every guitar in the store.” He characterizes those early days as “a good lesson, learning about life.”

Asheville favorite son Warren Haynes has fond memories of the music store, too. “It’s been there since I was a teenager,” he says. He used to visit the shop nearly every day on his way home from school. Dosier says that in those days, the building was also home to a bake shop. Young kids – Dosier says Haynes was among them – would come in to the music shop with powdered sugar all over their hands. “My job,” he laughs, “was to chase those guys out.”

When he got out of college (he studied political science), Dosier figured his music store days were over. But then Moritz asked him if he wanted the store. Frank recalls thinking, “Maybe I should have studied business!” He and his then-fiancee Becky talked it over. “These opportunities don’t come that often, and John promised to guide me through it. I thought, ‘he’ll be gone in 6 months, and I’ll have a music store,’” He and Becky managed the store for 3 years, finally taking over as owners in 1977, renaming the store Musician’s Workshop.

The business has changed a great deal in the nearly four decades since then. The couple learned how to weather economic downturns, and – like most brick-and-mortar retailers – are still figuring out how to survive in the face of online retailers, many of whom can offer competitive prices, zero sales tax, and free shipping. Though they don’t use the phrase “relationship marketing,” it’s a to the Dosiers’ continued success. Frank’s favorite thing about owning the store is “when somebody comes in, someone you haven’t seen for awhile. And you remember them from back in the ’70s.” Becky adds, “And they might have the same guitar they bought from us back then.” And “that’s not an uncommon thing,” says Frank.

Today a large portion of Musician’s Workshop’s business is sales, installation and service of sound systems for businesses and churches. The store also specializes in stringed instruments (electric and acoustic), including a remarkably wide selection of Taylor guitars.

For his part, Frank Dosier admits that a lot of people think that owning or working in a music store means hanging out with rock stars and playing guitar all day. “You do some of that,” he admits,” but first you’ve got to tear down some cardboard boxes, put out the trash and wash the windows.”