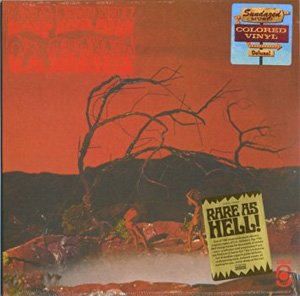 It’s likely overstatement to assert that there’s never been another album like C.A. Quintet’s spooky psychedelic masterwork A Trip Thru Hell, but it’s fair to say that the hit parade has never featured anything similar. Released in 1969 on a tiny label called Candy Floss, A Trip Thru Hell sold only locally; fewer than 1000 copies are thought to have been pressed, and those that did sell we bought locally by fans of the Minneapolis band. Original copies do occasionally change hands, but when they do, the prices range from $1500 and up.

There have been several reissues of A Trip Thru Hell, most on relatively small labels with limited distribution. A CD release in the mid 1990s added a dozen bonus tracks, including covers of “Mickey’s Monkey” and “I Put a Spell on You” plus some alternate mixes/takes of album tracks. Eventually each of the reissues went out of print, too.

In 2016 Sundazed Records reissued A Trip Thru Hell, and in keeping with the revered archival label’s approach, that vinyl release is as close to as possible a straight reissue of the LP as released in ’69. Save for a stylized Sundazed logo and the UPC code, the 2016 release looks like a pristine copy of the original. Consider the translucent orange vinyl disc itself as an upgrade to the black-vinyl original.

The music from this obscure group varies widely: The two tracks that bookend the record – the nine-minute “A Trip Thru Hell (Part I)” and a shorter reprise – feature wordless moaning from soprano Toni Crockett. The keyboard textures will be familiar to fans of the Doors and very early Pink Floyd. Doug Reynolds’ organ (either a Vox or Farfisa) conjures no end of spookiness. The band’s regular lead vocalist and songwriter Ken Erwin also turns in some melodic but eerie trumpet that’s miles away from what Herb Alpert was doing.

“Colorado Mourning” bows toward pop convention with its conventional length (two minutes and change) but is otherwise pretty odd stuff, with Erwin’s vocals buried in the mix. Strains of “A Trip Thru Hell” appear near the track’s end.

“Cold Spider” shows the influences of Bob Dylan (lyrical phrasing) as well as something of a jazz sensibility, especially in the nimble, exploratory bass work of Jim Erwin and Rick Johnson’s drumming. Some impassioned yowls add to the track’s unsettling vibe, and when – two minutes in – Tom Pohling lets loose with a gonzo electric guitar solo, the sound veers between heavy psych and avant garde.

“Underground Music” is a head-snapping musical left turn. Sounding a bit like a demented, druggy rethink of the Association with the Tijuana Brass helping out, the tune is all rubbery, reverbed guitar lines and impossibly catchy call-and-response choruses with vocals and trumpets in dialogue. The song’s solo leans heavily on wah-wah pedaling and fuzztone, and the result is as freaky as pop music got in ’69. In fact, by 1969 this kind of music was already pretty well out of vogue, having seen its period of popularity come and go a year or so earlier. But if one ignores the year of origin, it’s a classic of psychedelia at its finest.

“Sleepy Hollow Lane” is as close as C.A. Quintet would ever come to a conventional pop song. But it’s still not very close; while at times the vocal harmonies evoke mental visions of a quartet in turtleneck sweaters and blazers, the tune’s constantly-shifting time signatures keep the listener delightfully off-balance.

“Smooth as Silk” is anything but. An ambitious tune in which every instrumentalist and vocalist shines, it rocks aggressively. But the sonorous vocals and Ken Erwin’s trumpet (here reminiscent of Love’s Forever Changes) give the song a pop sensibility that balances the darker tone of melody.

The disc’s reprise of “A Trip Thru Hell” closes the record, and starts out with a completely different melody than the opening track. Ken Erwin and Toni Crockett duet an octave apart, and Crockett adds more of her superb high-end wordless warbling. Pohling’s guitar is made to sound a bit like a sitar, and when the main theme briefly appears, it ties things together nicely. A bit of ersatz lounge jazz is only the latest (and last) musical change-up on a wonderfully varied record. Some backwards guitar gives way to a final freakout/noisefest that wraps the album.

Rod Eaton’s blood-toned cover art recalls Hieronymus Bosch, and it’s expertly recreated on this flawless Sundazed reissue. Fans of psychedelia at its darkest likely have this rarity in their CD collections already; this new release allows them to add a faithful reproduction of the original LP to their shelves.