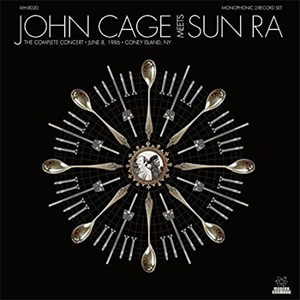 A musical summit between avant-garde legends John Cage and Sun Ra is the kind of thing that – had it not actually taken place – history might have had to invent. While the idioms within which each of these giants worked were quite different from one another, both men shared a commitment to pushing the boundaries of what was thought of as conventional art and/or music.

On June 8, 1986, Cage and Sun Ra shared billing at an event at the Sideshows storefront theatre in Coney Island, New York. An edited tape of that performance was released the following year; this new release features the complete and unedited warts-and-all program.

Those who know little about John Cage tend to know at least one thing: he composed a work called 4’33” in which he sat at a piano and essentially did nothing for four and a half minutes. That concept of silence as a sonic choice – as part of the mix, so to speak – informs a good deal of Cage’s pieces at the 1986 performance. He engages in wordless vocalizations (titled “Empty Words”) in which he creates all manner of odd sounds with his voice. Long periods of silence between the sounds are quite common.

Music fans who have heard just a little about Sun Ra might know that he claimed to be from the outer reaches of Earth’s solar system. His musical pieces on this program – “Untitled Keyboard Solo 1” and so forth – reinforce that idea; with a very improvised feel about them, the works are combinations of outré melody, synthesizer experimentation and (what will sound to many listeners like) just plain noise. But just when things get their noisiest, Sun Ra deftly pulls the music back toward something more accessible. The instruments at his disposal would seem to include piano, harpsichord, Clavinet and synthesizer.

The monaural recording was made using a minimal setup of stage mics; this means that tracks like the previously-unreleased “We Hold This Myth to Be Potential” feature Sun Ra’s keyboards well out front, but his vocal recitation is nearly inaudible. Thankfully, the CD digipak includes a transcription of the piece and three others. “The Damned Air” is a spoken word (no music) piece from Ra, and though it’s hissy, his recitation can be heard. “This is the Space Age” is a kind of distillation of the man’s purpose.

Ra’s “Untitled Keyboard Solo 3” is a challenging work that suggests Glenn Branca, Edgard Varèse or any number of out-there composers. It might make a fine soundtrack for greeting Halloween night trick-or-treaters, too. June Tyson adds some free-jazz vocals to “Enlightenment,” a giddy yet decidedly weird ditty. The apocalyptic “Untitled Keyboard Solo 4” is perhaps the most engaging musical work on the set, though it incorporates a good deal of static and distortion.

Cage and Sun Ra finally get together on the 18th track of the performance, but they do so within the confines of a work titled “Silent Duel.” No bonus points if you figure out what it sounds like. “Empty Words and Keyboard” is exactly what its title suggests, featuring minimalistic contributions from both men, seemingly with each leaving space for the other. It’s followed by another “Silent Duel” that’s – surprise – quite similar to the first.

Sun Ra closes the set with the fifth in the evening’s series of untitled keyboard solos. Leaning toward what many might consider sound-effects or musique concréte, it’s in turns terrifying and playful.

Certainly not for the faint-hearted nor the musically parochial, John Cage Meets Sun Ra is nonetheless an important document of the musical collaboration of two of the 20th’s century’s most “outsider” composer-performers.